TKHS Students are Learning It's Right to Be Real! 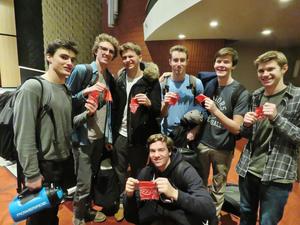 Three pictures showed three different stories to Thornapple Kellogg High School students. The first appeared to show a man running away from a vehicle. In the second, it appeared the man was running toward another person. It wasn't until the full picture was revealed that students saw the man as a hero pushing the man out of the way of danger.

"The perfect pictures of your friends posted on Facebook or social media are what people want you to see. But they don't tell the whole story," TKHS teacher Lance Laker said. "Everyone has stress and anxiety sometime in their life. It's not perfect."

Laker encouraged students not to jump to conclusions or assumptions without seeing the full picture and to build real relationships with others.

Through a series of teacher and counselor-led assemblies, TKHS students will focus on "Making it Right to be Real." It's an extension of an effort started two years ago called "Making it Cool to be Kind" and expanded last year to "Connect Affect."

"We want our staff and students to band together to recognize everyone struggles with something and create openness and unity where we can talk with each other on a real level," said high school principal Tony Petersen.

He said students and staff are encouraged to be real and authentic with each other and not feel afraid to talk about their anxieties or stress - whether it's a situation in a class,  issues at school or at home.

"When we all are real with each other and care about each other, that's what we want," said Petersen. "We want this to be sustained change for our school."

On their way into the first assembly, each student was handed a small scrap of fabric - a piece cut from a red bandana. They turned it over in their hands looking for a clue as to what it meant.

A short video gave them all the answers they needed and the meaningless scrap of fabric took on a whole new meaning. Students held on to their piece a little tighter and tucked it away for safe keeping. It became a reminder that they are all cut from the same cloth regardless of social or economic status. It also reminded them of the importance of being there for each other and helping one another.

The short video told the story of Welles Crowther, one of the many 9-11 victims who died in the Twin Towers. Most of the high school students weren't even born when the terrorist attacks occurred, but they watched silently as they learned of Crowther's heroic actions that day and how he chose to make a difference for others.

Crowther wasn't a firefighter, but it didn't stop him from taking on the role of a hero as he led people out of the burning building. Once he got the first group to safety, he turned and ran back up the stairwells to help others. Survivors said they didn't know the man, but remembered he had a red bandana - something Welles always carried with him since he was a young child. Those same survivors later positively identified a picture of Welles as the man who led them to safety.

Since then the story of the red bandana has been told and retold. And hundreds of people across the country now carry a piece of the red bandana with them as a reminder to do what's right and to help others - to be the kind of person who goes up the stairs while everyone else is going down.

Laker said he looks at his piece of fabric every day. "We're all cut from the same cloth, but we all have flaws as well," said Laker.  "We need to be real to each other and help each other."

Holding up his piece of a red bandana, he challenged the students. "Be real. Be that person who is going up when all others are going down."