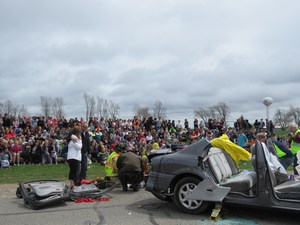 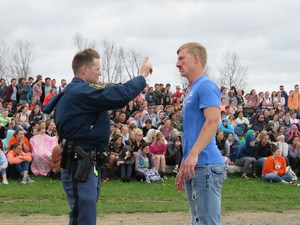 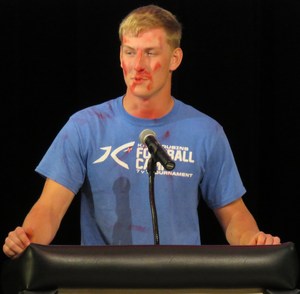 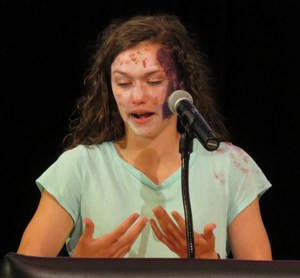 Mike Blair let out a gut-wrenching cry. His wife dropped to her knees beside their daughter Alexandra who was lying lifeless on the roadway just beyond two wrecked cars. Firefighters, EMTs and police bustled about trying to help crash victims and assess injuries. Although it looked and felt very real, it was all part of a mock crash scene at Thornapple Kellogg High School Friday afternoon. The mock event is put on every other year as a very vivid and emotional reminder to students of the dangers and consequences of drinking and driving and distracted driving.

"I challenge you as you all go forth -  think, think, think. Be strong and courageous, make good choices and live a wonderful life," said Alex's mother Wanda Blair to the TKHS student body after the mock crash, funeral and trial.

Barry County District Court Judge Michael Schipper sentenced the drunk driver in the mock court scene telling the students it's one of the hardest things he has to do. He acknowledged what took place at the school Friday wasn't real that day. "I know this is an enactment, but these things happen just like this every day. And it's not just about the person who is killed in the accident. It's the families and the driver who is going to prison for 15 years.  Please, please, be smart. It's not just enough for you not to drink and drive, you have to stop others from doing it too."

In fact, the crash victim in the mock accident wasn't a drunk driver. She had been at a party, but she hadn't been drinking. The driver who hit her was the drunk driver.

Alex Blair's voice cracked and wavered and she had to pause more than once as she read one last conversation to her Mom. "I didn't drink and drive Mom, so why am I the one to die?" she asked. She was just one of the six students who participated in the two-car crash scene Friday afternoon on the service drive between the high school and middle school.

"It felt a lot more real than I thought it was going to be," said Kyle Smith, the student who played the role of the drunk driver. "The reality that it could really happen and seeing Alex lying there on the ground - it was emotional."

"It was so hard to see all this.  I don't want anyone to have to go through this for real," said Sarah Possett, another student playing the role of a crash victim. Other students involved were Gary Buller and Jaxson Jacobson.

Blair was still emotional as she tried to talk to the students. She said it really hit her when her mom came over and put her hand on her while she was lying on the road surface, pretending to be dead.

Fire and EMS personnel from Thornapple Township, Wayland, and Freeport arrived at the mock crash scene with sirens blaring and lights flashing. They treated it as a real crash - evaluating the victims and extricating those trapped inside the vehicles using all their training and tools.

Michigan State Police and Barry County Sheriff's deputies were involved as well with MSP troopers leading the on-site investigation of the drunk driver and putting the student through sobriety tests before making the arrest.

After the crash scene was cleared, students headed back to the high school where a Beeler-Gores Funeral Home hearse was parked out front. A video of Alex Blair's life photos played on a large screen above a closed casket as students entered.

Pastor Dan Beyer led a mock funeral before Judge Schipper and attorney Tim Ver Hey conducted a mock court scene. Ver Hey acted as the prosecutor asking for the maximum 15-year  sentence for the drunk driver. Then Smith was taken away in handcuffs giving his own family a last hug goodbye.

High school Principal Tony Petersen told students it's hard to realize the impact of their own decisions. "Please make good choices," he said.

He introduced a video of another accident victim - but this one was real and just 5 years old. Caleb Duley, a Thornapple Kellogg student, was killed less than a mile from the high school at an intersection many students travel through every day.

Duley died in a traffic crash in May 2015 after a distracted driver failed to stop at the intersection. Petersen reminded students that being on their phones, taking selfies and texting while they are driving is just as dangerous as a drunk driver, and too often leads to the same tragedies and consequences.

Posters, featuring a photo of 5-year-old Duley, smiling and happy, now hang in the school hallways with one simple message: "Don't be a distracted driver."