Students Feel Good About Service to Others 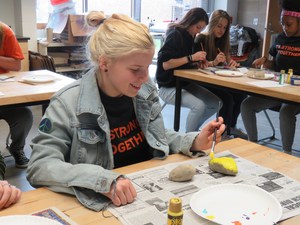 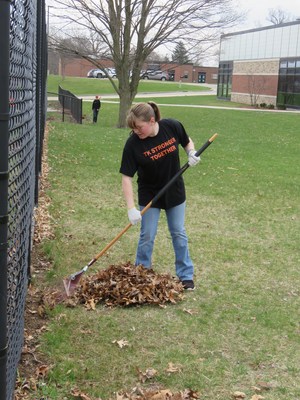 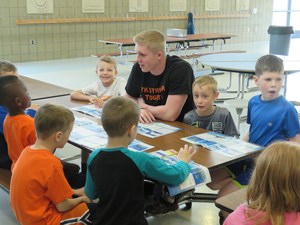 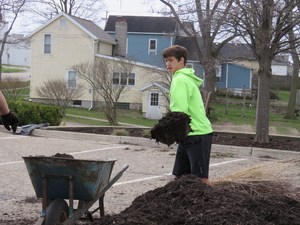 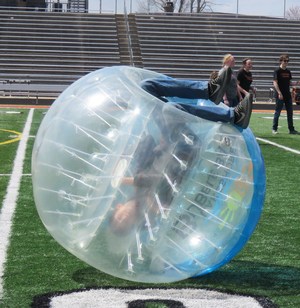 Instead of carrying backpacks filled with homework and books, TKHS students Friday brought rakes and shovels and wore worn-out jeans and shoes that could get dirty. More importantly, they brought a positive attitude and a willingness to help.

It was far from a typical day at school - but one where students learned important life lessons about caring, giving and making a difference in the community and people around them.

This year's annual service day came with a few changes from the previous six years. Instead of being held the day before Christmas break, this year's service day was planned for a spring cleanup. Secondly - students didn't just work at the school, but many were bussed out into the community to assist with a variety of projects.

To start the day, they were inspired by motivational speaker Scott Backovich. He told students they could make change happen. "I'm not asking you to change your life, but have the courage to change someone else's. Become a catalyst for change by doing simple things," he said.

He told them they each have the power to influence their world and make a difference and challenged them to become catalysts for change.

"When you give people what you have, you give people hope," he said. "The greatest gifts never cost money - just courage. Don't be afraid to give a little bit of your time and notice other people."

After the assembly, students took off to a variety of service projects. Those who stayed in the high school had several options. Some painted kindness rocks used by organizations to simply promote kindness and uplift spirits. Others sewed sleeping bags for the homeless, braided cut up t-shirts into dog toys for the animal shelter and decorated bags for Kids Food Basket. Colorful duct tape became wallets for Degage Ministries and children in hospitals might get a surprise when they look at their IV bags with a cheerfully decorated cover or get a bag filled with beads to make a simple craft courtesy of TK kids. Elementary students might get a handmade tooth fairy bag made by high schoolers during the day.

"It's just an amazing way to give back to the community," said Geraldine Jackson as she painted a rock a bright color.

Jack Cove said he was inspired and realizes that one simple thing can change someone's day.

Students visited the elementary schools to read and work with younger students. Some went to retirement homes to visit with the elderly.

Emma Ringleka raked leaves away from the fencing around the basketball courts by McFall Elementary School. "I like being outside. This is a good way to give back to the community and it's nice to be able to help out and make things a little better," she said.

Without exception, students said they enjoyed being able to give back to the community that so strongly supports the schools. They also enjoyed a change of pace from the regular classroom learning but realized they were still getting a very important lesson.

"It's nice to be able to do something for the community,"  said Brooke Luepnitz.

Village council member Phil VanNoord worked alongside students clearing brush, vines and debris from along the river. "They've done great, great work," he said. "I think this is a wonderful idea. It really helps out the community and gives the kids a taste of what it's like to help out. It's a chance for the schools and community to work together."

The work wasn't always easy. Using shovels, students filled wheelbarrows with new mulch for flower beds at the fire station. They chopped, cut and pulled vines, weeds and small branches to clear a better view of the river. Some were on their hands and knees picking pieces of broken glass out of the sand and dirt along the river bank. At Crane Road ball field, students dragged the fields to smooth out the infields and create safe fields for younger players. And without exception, each student seemed to have a smile on their face and a willing attitude to help.

No good deed goes unnoticed and the students' hard work in the morning was rewarded with a school-wide lunch followed by an end-of-year celebration. Students played football, volleyball, bean bag toss games, and Frisbee on the football field. They raced through an inflatable obstacle course and bounced around in giant Bubble Balls. Some played giant versions of Jenga and Connect 4. Others just enjoyed sitting in the sun and being with friends. Whatever their choice, students said they enjoyed and appreciated the time together.