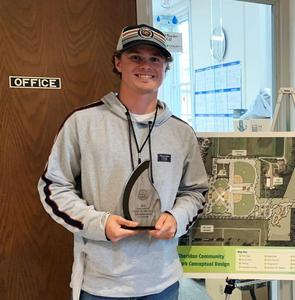 Colson Brummel hasn’t been out of high school long, but he’s already finding a way to make a big impact in his community. A 2020 graduate of TK, Brummel was recently honored with the sixth annual Thornapple Area Parks and Recreation Commission Andy Saldivar Coach of the Year Award for the 2022 baseball/softball season.

A TAPRC social media post said Brummel was selected “for modeling outstanding sportsmanship while also creating a fun, supportive environment for athletes to learn baseball and softball skills.”  Brummels’ nomination highlighted his preparedness, love of the game, and clear, positive feedback as he helped his U12 athletes learn the skills of the game.

“I was completely surprised by this award,” said Brummel. “It’s a good feeling to know you’re appreciated.”

The honor is especially meaningful to Brummel who wasn’t able to play his final baseball season in high school due to the COVID shutdown. He had hoped to earn a baseball scholarship and continue playing at the college level.

He played football, basketball and baseball in high school until a knee injury his senior year of football ended his season early and left him out of action for basketball. But he still had hopes of saving a full season of baseball - the sport he loves most.

“When COVID shut everything down, everything just sort of stopped then. My knee injury was bad and I was just devastated for a while. I had really worked hard to get back to being able to play baseball at least,” he said.

He admits it was an extremely difficult time for him, not just physically but also mentally. “I just knew there was nothing I could do to change anything. It is what it is, and I realized how I rebound from it will make me stronger in the end.”

His love of sports brought him to coaching. He started coaching fifth and sixth grade basketball while he was just a sophomore in high school. He added coaching football and U12 baseball after graduation. “I love being around kids. When I got offered to help coach, I didn’t even think about it. I just said I would do it.”

He emphasizes many of the lessons he learned from his own coaches - sportsmanship, being a team player, having a positive attitude and doing your best. “I have to make sure the players aren’t afraid of making mistakes and to never give up.”

He credits his own coaches over the years with instilling the right principles and building positive relationships that go far beyond the sport. He also credits his parents, Larry and Francie, for raising him to understand those same values and principles.

When he’s not busy coaching or getting in on a pickup game somewhere, Brummel currently works for C & T Builds out of Middleville and enjoys playing video games with friends across the country.

Favorite Memory of High School: “I really enjoyed reffing the Special Olympic basketball games and just having time to be with my friends.”

Advice to a Rookie Coach: “Don’t be afraid to get after the kids a little and make them do what they’re supposed to do. Yes, it’s supposed to be fun but it’s not recess. Teach them how to play the right way and be someone for them to look up to.”

Best Advice He Ever Received from a Coach: “If you’re going to make a mistake, make it at 100 miles per hour. Don’t hesitate. Be calm. Be confident and if something isn’t working, find a way to fix it.”

Super Power He Would Most Like to Have: The ability to fly - just so I could get places fast.

Best Thing About TK: “I’ve been in a lot of different schools through sports and everything and I’ve heard it before. It sounds kind of corny, but it really is the people here. Not just in the schools, but the whole community. It’s very positive. It just feels like home and a place I want to someday raise my kids and send them to school.”