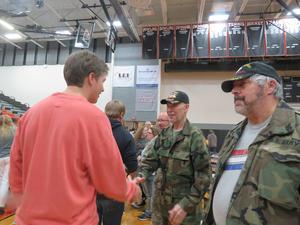 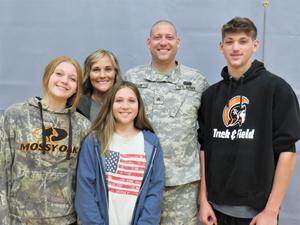 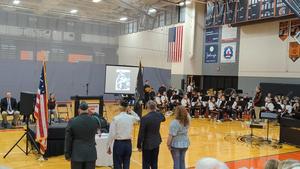 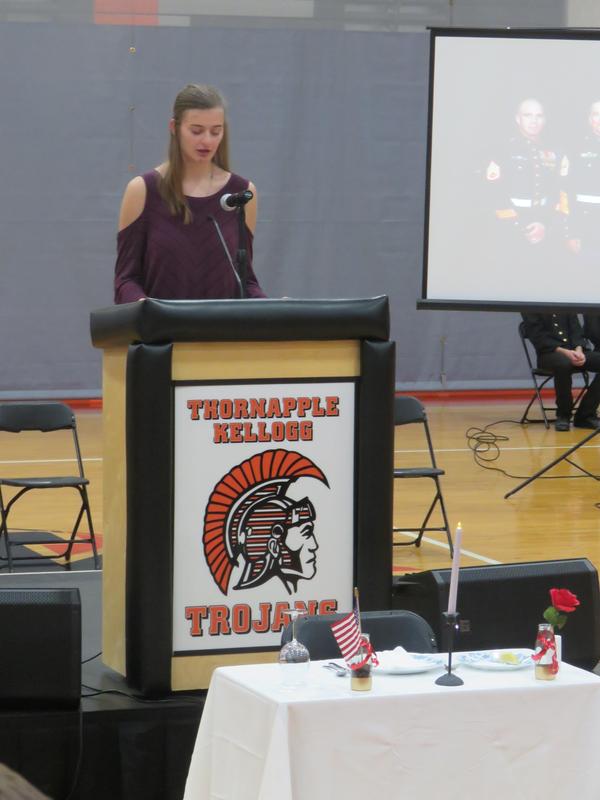 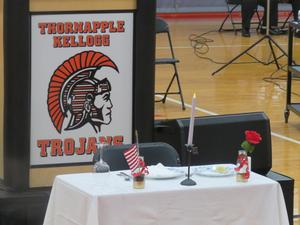 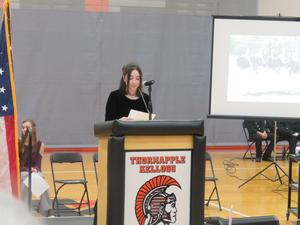 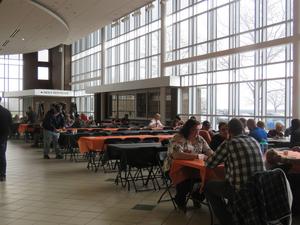 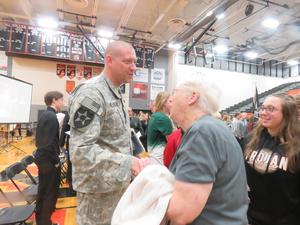 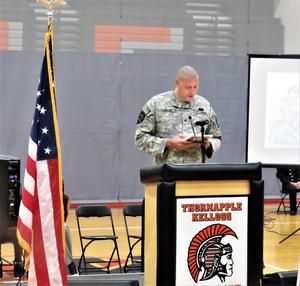 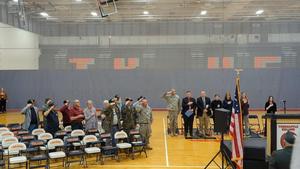 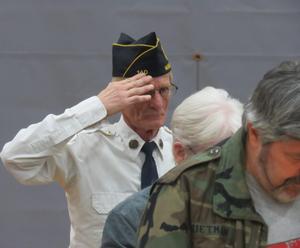 A long line of Thornapple Kellogg High School students reached out to shake hands with veterans after a patriotic and inspiring Veterans Day Assembly. “It means a whole lot. It just really means a lot,” said Sgt. Daniel Rietman.

“It was hard not to cry through the whole program,” said Dave Willyard, “That’s how much it means to me.”

Andrew Beck was also noticeably overcome with emotion as he started to give his keynote address as the Middleville Honored Veteran of the Year for 2023. The thunderous applause and standing ovation of more than 1,000 students, teachers and community members filling the gymnasium was overwhelming as he stepped up to the microphone.

But the sight that really made his voice crack when he spoke, was the sight of the POW, MIA empty table set before him. “This table is set across the world today in all combat zones. That is pretty important,” he said.

The program was filled with tributes from students, music from the high school Honors Choirs and symphonic band, and roll call of the veterans attending. This is the 12th year the high school has held the assembly to show honor to veterans, but it is the first time in two years that it has been open to the public again.

Even though the gym was filled with more than 1,000 high school students and community members who gave no less than a half dozen standing ovations throughout the program. Still, there was not a whisper to be heard when a moment of silence was called and Taps echoed eerily through the space.

Government students presented a welcome and several readings to the guests. Evelyn Callahan welcomed everyone to the event, thanking everyone for attending. The TKHS symphonic band performed the National Anthem while veterans stood at attention and saluted.

TKHS students Ayden Meek and Valerie Tamez read essays they wrote about what Veterans Day means to them. “Today serves as a reminder to us all that freedom is not free. That brave men and women have given their lives to keep his freedom,” said Meek.

He talked about his mother’s role as a support specialist for the military working in communications. She was on active duty for about five and a half years and during this time used her skills to help people around her the best way she could. She devoted a lot of her time to helping others while making sacrifices along the way.”

“I just want to say thank you. Thank you for all you have done and the sacrifices you’ve made to preserve this country’s freedom,” said Meek.

Tamez said she never thought about Veterans Day before she wrote her essay. She talked to her grandfather about his experiences. He had signed up for the Army during 1959 at a time when people were being drafted and served three years as a teletype radio operator.

“Most importantly is what he told me at the end of our conversation. By quote, he said ‘Don't thank me, thank the many.’”

Abigail Dumond read a poem she wrote called “Red, White and Blue.”  In it she said in part, “Those who have been lost for our land of the free, we should recognize their absence and keep their memory. They're dedication to this country, staying strong and true, allows us to still stand today with the red, white and blue.”

Hudson Thomas also read a poem called “Veterans Day” written by Cheryl Dyson and Skylyr Davis-Dunn read the poem about the MIA POW Table, explaining the significance of each part of the setting.

“I call your attention to this small table which occupies a place of dignity and honor. It is set for one symbolizing fact that memories of our armed forces are missing from our ranks. They are referred to as POWs and MIAs. We call them comrades. They are unable to be with their loved ones and families so we join together to pay humble tribute to them and to bear witness to their continued absence,” said Davis-Dunn.

Beck took a moment after stepping to the microphone and looking at the empty table before him before he began telling his story of service.

He admits he wasn’t a model youth when he was growing up in Kentwood and never applied himself in school. “One day in history class, the teacher turned on the TV and we watched as 9/11 unfolded in front of us. Who knew that that day, that those moments in that classroom, were going to change the trajectory of my entire life.”

Beck graduated from South Christian in 2001. He was changing oil in vehicles for $7 an hour and had no idea what to do with his life. He joined the Army and later volunteered to be deployed to Iraq. He was a marksman for his unit and spent his time breaching doors, clearing houses, detonating explosives, participating in demolitions and engaging in building community relations.

Beck said the Army gave him structure, discipline and the moral compass he lacked. He began to live by the seven basic values of the United States Army - loyalty, duty, respect, selfless service, honor, integrity and personal courage.

“Individually these values are ethical. Together they have the power to create an unrelenting force that can be used to do small acts of service, like when our unit volunteered at an orphanage in Korea or something more impactful and monumental like when we overwatched the protected Iraqi citizens as they held their first democratic elections.”

After his first tour of duty, he transitioned to the reserves, but found the change back to civilian life harder than he expected and he unknowingly started showing symptoms of post-traumatic stress disorder.

Retirement left him without structure again with no purpose and no identity until one day Lee Principal Angie Jefferson asked him to volunteer with some students. “It was the first time I felt like I was part of a community outside of the Army,” he said.

From there, he decided to become more involved in the community and helped expand the community's July 4 fireworks display. He joined the Lions Club, is a member of Thornapple Valley Church and a member of the Downtown Development Authority in Middleville.

“What I love about my story is that the people of Middleville invested in me. And now I can invest in Middleville,” he said.

He encouraged students that there are ways they can make a difference. “Show respect to yourself and your peers, even if they're different than you are. Honor your parents or guardians, even if they don't understand and put your own desires aside to selflessly serve those at home, or in your school, in your workplace, or in your community. These are all ways anyone can make a positive impact and influence not only on your own life but on other peoples’ around you.”

Beck also asked the audience to again recognize all veterans. “Being nominated as Veteran of the Year was very unexpected and I am truly grateful to be honored in this way. And while you honor me today for my service, I’d like to say thank you. Thank you for investing in me, allowing me to serve you and to be recognized as Middleville veteran of the year and more importantly, thank you to all the veterans who are sitting here, to those who have already served before me and to those that are serving or will serve after.”

As the honored veteran, Beck will serve as the grand marshal for the Middleville Memorial Day parade in 2023 and will be awarded a military honor flight to Washington D.C.