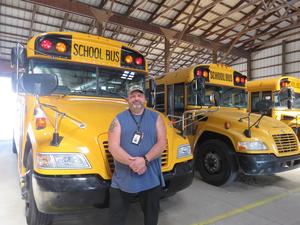 Brandon Fox never rode the bus to school when he was a kid, but he’s getting a lot of hours in the big yellow rig now. For the past 19 years, Fox has been a school bus driver - the last 10 years at Thornapple Kellogg Schools.

“I love my job. It’s the best. I love seeing the kids’ smiles in the morning and getting a hug and a goodbye from them in the afternoon,” he said. “I wouldn’t trade this job for anything.”

Fox typically drives Bus #22 and said the students on his route become like his family. “I’ve had some kids since they were just starting school and now they’re in high school. The hardest part is watching them grow up and know they’ll be gone in another couple of years.”

Bus driving wasn’t always on his career radar. After graduating from TKHS in 1990, Fox attended Grand Rapids Community College with hopes of becoming either a social studies or English teacher. But plans changed. After a year of college, Fox got married and started working at Bradford White. He left there for a Steelcase job and when Steelcase began downsizing, he was led to open positions for school bus drivers in another district.

“I just fell in love with it right away,” he said.

Fox said one of the hardest parts about being a bus driver are the discipline issues. “It’s a fine line you have to walk between being their friend and then being the driver and making sure they are all following rules,” he said.

He greets each student by name with a smile and an upbeat “good morning.” He’s been known to sing along to the radio often and especially likes to sing happy birthday to his riders - especially the older students who get embarrassed.

His radio is usually tuned to stations the kids like, but he mixes it up every now and then switching to the North Pole radio and playing Christmas songs at any time of the year. His bus is also decorated for Halloween and Christmas and he’s threatened to cover the inside of his bus with blue and gold paper on those Michigan vs. Michigan State days.

Home has always been Middleville and he still lives in the house he’s been in since he was three years old. His two dogs, Prince, a Boston Terrier, and Harley, a Chihuahua/Dachshund mix, eagerly greet him after his routes are done. He also loves spending time with family - a grown daughter, sister, several nephews and his 102-year-old grandfather.

In the summer, Fox continues working for the district helping the cleaners and taking care of the buildings, but he said he’s always happy when school starts again and he gets to see the kids.

“I can’t think of anything more rewarding than to be part of a kids’ life. They know you. They remember you. I see them sometimes and they come up and say “Hi”. It’s just the best feeling.”

Advice to New Drivers:  Take your time and listen to the kids to make sure they know what they are supposed to do. Be a friend, but also know when you need to set limits.”

Superpower He Would Most Like to Have: Ability to fly and go anywhere

Favorite Vacation: Camping with parents, grandparents and other family members

Michigan or Michigan State: I like them both until they play each other, then it’s Michigan all the way.

Favorite Movie: Lord of the Rings

What Makes TK Community a Special Play to Live and Work: “I’ve lived here all my life. I can’t think of a better place to be. There are a lot of good people, friends, and lots of good memories.”