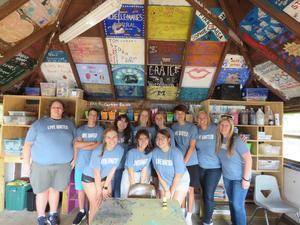 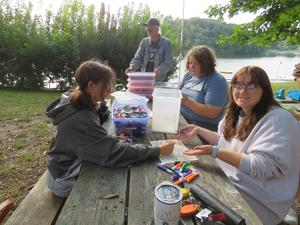 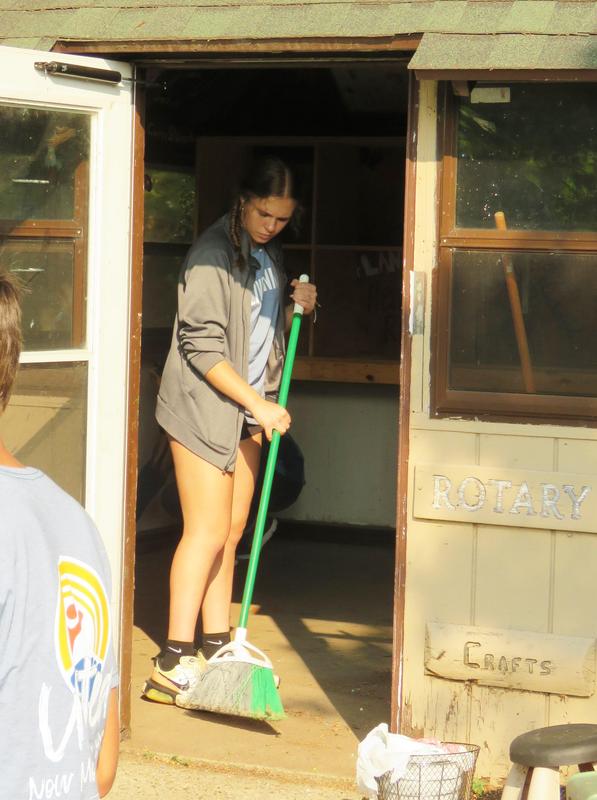 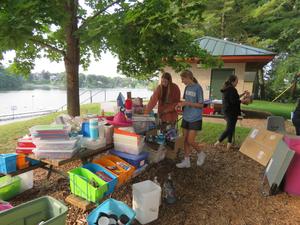 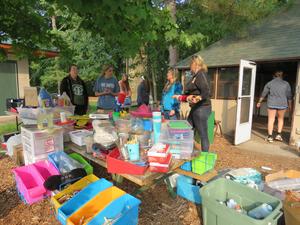 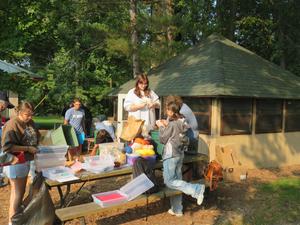 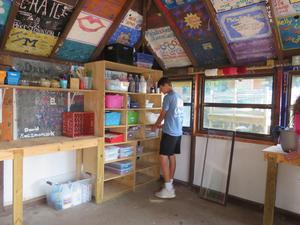 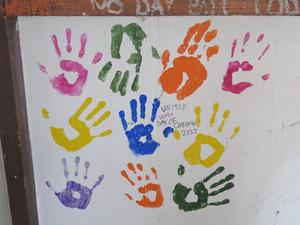 In a flash, all the boxes, tubs and canisters filled with supplies were removed from the Camp Algonquin craft cabin and dust began to fly as students swept out the summer’s layers of dirt and debris.

Thornapple Kellogg High School Student Council members worked at the camp Thursday morning as part of the United Way’s Day of Caring with the theme “United, More Now Than Ever.”

“I used to come out here every summer for camp as a kid. I loved it. It was always so much fun and now I’m getting to help do something for kids who come back here,” said Student Council President Thea Zellmer while she sorted through supplies.

Students made quick work of clearing everything out of the cabin so shelves, windows and the floor could be cleaned. Once the variety of crafting supplies were outside, students sorted and organized items into bins, baskets and containers so they’ll easily be ready for use in the future. Others grabbed brooms to sweep out the cabin.

“It’s just nice to be able to give back,” said Student Council member Tyne Bufka. “It feels good.”

Tessa Wenger was unraveling tangles of colorful yarn. “It’s just good to help the community. It’s a fun day of helping other people.”

“It’s nice to be nice,” said Evelyn Callahan who helped with the heaping pile of yarn.

Lukas Walters said he is glad he’s part of this team from the school. “It’s fun being out here and knowing we are helping people. It’s also a fun bonding experience for the student council.”

Once the supplies were sorted, organized, put back in labeled containers and returned to shelves in the cabin, students left one more tangible mark on the cabin. Each of them were invited to paint their hand and leave a handprint on the cabin wall, already adorned with memories from previous campers and groups.

“We get to learn to give back,” said Mia Dickman of the day.

Student council advisors Caitlin Chamberlin and Liz Ritsema rolled up their sleeves and helped in the clean up efforts. Chamberlain said the student council goal is to build school spirit, camaraderie and give back to the community that supports the district. “This gives them a starting point to see how what they do overflows to others. It sets the tone,” she said.

Ritsema said she loves being able to bring students out for this day. “Our students love doing this every year. They always ask if they get to do this and this project is one I think they especially appreciate doing because they know it’s for kids.”

Camp Director Megan Muma said she was impressed by how quickly the students tackled the task at hand. “It would have taken us a week to get this all done and they came in and did it in a couple of hours. It’s fun working with them.”

Last year, students moved mountains of mulch to flowerbeds and sitting areas in the camp. In previous years they’ve pulled brush from the Paul Henry Thornapple Trail in Middleville, spruced up the banks of the Thornapple River, cleared flower beds and raked leaves.

The day started off early with a kickoff event at the Barry County Expo Center. Thornapple Kellog band members welcomed guests with a variety of selections then sent volunteers on their way with a spirited playing of the school song.

Volunteers gathered to hear speakers thank them for their service and remind them of how much Barry County United Way does for families within the community. This year’s theme, “United now more than ever,” reminds the community that even more can be accomplished when everyone works together. “We are stronger together,” said United Way Director Lani Forbes.

Forbes said United Way has many programs including those that help people in need from paying utility bills, tax services, housing assistance, fresh food giveaways, and veterans assistance. This year’s United Way campaign goal of $700,000 is off to a good start, she said, with nearly 35 percent of the goal amount already raised.

Morgan Johnson, director of outreach and community engagement,  said this year the United Way is seeing the highest number of Day of caring volunteers ever. She offered some inspirational quotes including one from Audrey Hepburn who said, “Nothing is impossible. The word itself says ‘I'm possible,’” and another from Michael Jackson, “If you wanna to make the world a better place, take a look at yourself and then make a change.”