Student Overcomes Huge Obstacles to Graduate with His Class 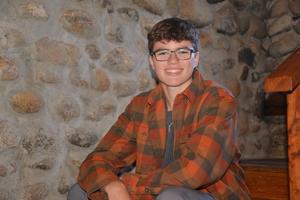 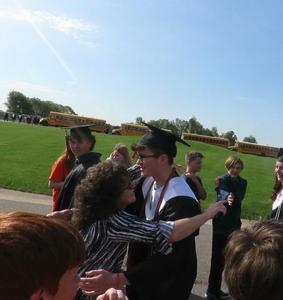 Like his Class of 2022 classmates, Michael Blair’s sophomore year ended abruptly with the sudden closure forced by COVID. Returning for his junior year meant quarantines, remote learning, wearing masks and social distancing as much as possible. Michael was looking forward to a more “normal” senior year filled with memories with friends, a successful cross country season and hopes of breaking his personal record in the long jump that took him to regionals a year ago. Unfortunately, his senior year ended up being anything but normal.

“It’s just the way it is,” he said with a slight shrug of his shoulders. “I’m just glad I got to come back this year at all and am going to graduate with my class. I leave everything to God. If something is meant to be, it will be,” said the 18-year-old who says his unwavering faith has only been strengthened from all he’s gone through.

The Day Everything Changed

On Nov. 20, 2021, Michael was earning volunteer hours for National Honor Society as he helped set up for a craft show in the high school gymnasium. “The last thing I remember that day was texting my Mom that I was on my way home,” he said. He still has no recollection of anything that happened for seven days after that.

At 9:58 a.m. that day, only about 200 yards from his driveway, his truck went off the rural road in Barry County, down a ravine and crashed into a tree and boulder. The drivers’ side of the truck and the front of the truck were both smashed in around him.

Orangeville Fire and Rescue arrived quickly, but it took 41 minutes for them to pry, cut and excavate Michael from the wreckage. During that time, Michael lost a significant amount of blood and became hypothermic before being airlifted to Bronson Hospital and their Level 1 trauma care center. His status was critical and doctors weren’t sure he would survive or know if there would be permanent damage even if he did.

The crash broke his left femur and nearly every bone on the left said of his face. His jaw was broken and he lost all six top front teeth when his upper palate was also broken. His left eye sagged out of place with the loss of the bone structure to hold it.

“I have no memory of any of it,” said Michael, who to this day doesn’t know what caused the crash. “The whole thing never seemed like that big of a deal to me because I don’t remember it. After I found out, I just felt bad for my family that they had to go through this. They have all the emotional damage. I just have the physical damage. Sometimes I feel like someone is truly telling me this story about someone else - not me.”

He spent 12 days at Bronson Hospital where he had surgery on his leg and a six-hour surgery with two plastic surgeons working to repair all the broken bones and restore his face. Additional maxillofacial surgeries have helped rebuild his mouth and jaw and prepare him for eventual dental implants. Doctors were amazed at how well Michael responded and that Michael suffered no long-term brain or neurological injuries.

Michael spent another 10 days at Mary Free Bed Rehabilitation Center in Grand Rapids where he underwent extensive physical and speech therapy and even had to learn how to swallow again. He had lost 30 pounds and was anxious to regain his strength.

His mother, Wanda, said Michael never let his injuries stop him from what he wanted most - to get back to his friends his senior year. “He was a beast in physical rehabilitation,” said Wanda. “Whatever the doctors told him to do, he did it.  He worked so hard and he never gave up.”

Michael’s determination, dedication and grit paid off when he returned to school just days before spring break in April.  It was only for a few hours each day, but Michael said it was the best thing to see his friends at school again.

Additional surgeries put his full return to school on hold, but he continued to keep up with school work virtually and was back in class as soon as possible. He started driving again and continued his physical rehabilitation to regain more strength. He went to prom, will graduate with his high school class this week, and will attend the senior class all-night party.

“We’re so grateful, humbled and truly blessed,” said Wanda. “It’s amazing how God put the right people in just the right places that day. They just did their jobs and did what had to be done to save him. The Orangeville Fire Department and all the rescue workers were amazing. They were like ants crawling all over the truck to get him out.  They had one goal in mind - to save his life.”

Michael credits his faith, family, friends and everyone who has been part of his journey for the past six months. “I’ve learned I can handle more than I ever thought I could. God will let you bend, but not break. He knew my family and I could handle this,” said Michael, who is a member of the Orangeville Baptist Church.  “My faith got me through this - and I just had to lean on Christ and just know I was never alone in any of this.”

Michael and his family said they have been overwhelmed by the support and caring of so many people. “Some of them don’t even know me and they were reading the Caring Bridge page and saying prayers for me,” said Michael.

He’s extremely grateful for all his friends who called or stopped by to spend some time with him during recovery. He also said he wants to thank the TK administrators, counselors and teachers who regularly stayed in contact.

“My teachers made sure everything was on Google Classroom so I could see all the lessons and assignments. I could email my teachers with questions any time. They did everything in their power to make sure I could keep up with my school work. I couldn't have done it without their help,” he said. He was even able to keep his grades high enough to graduate with honors.

Wanda said there are so many people to thank and it's difficult to find the right way to do it. First responders have been invited to Michael’s graduation open house and recently she and her husband, Mike, and Michael, wrote a letter to the TK Board of Education, saying in part:

“As we are wrapping up Michael Blair's senior year, we are beyond humbled and grateful for the TKHS staff that have done absolutely everything they could possibly do to support our precious Michael and our family through that tragic day of November 20, when he was in an automobile accident. … The words THANK YOU do not seem to be enough! We wanted you to know how priceless the TKHS staff has been to our family in helping Michael heal mentally and physically and getting him back to in-person learning to wrap up his senior year.

When Michael walks across the stage to receive his diploma, he knows it’s by the grace of God he’s able to do so. “My faith is strong. I’ve been raised in the church my whole life. My faith is even stronger now. I know God has everything in control and I know every day is precious.”

He’s still following doctors’ orders and restricting some physical activities while his maxillofacial surgeries continue to heal, but he’s also excited about his future. “My doctor told me to go live my life,” said Michael. “That’s exactly what I’m going to do. God has a plan for everyone, and it wasn't his plan for me to die in that accident that day.”

Next fall, Michael plans to attend Grand Rapids Community College and in two years, transfer to Ferris State to study engineering and design or possibly architecture.

“Without faith, family and friends, I couldn’t have done this,” said Michael. “I don’t like change very much, but I’ve learned I just have to go with the flow, appreciate every day, lean on my faith and trust in God’s plan for me.”