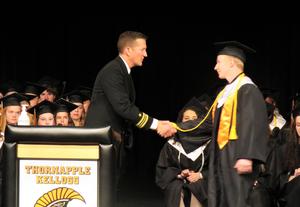 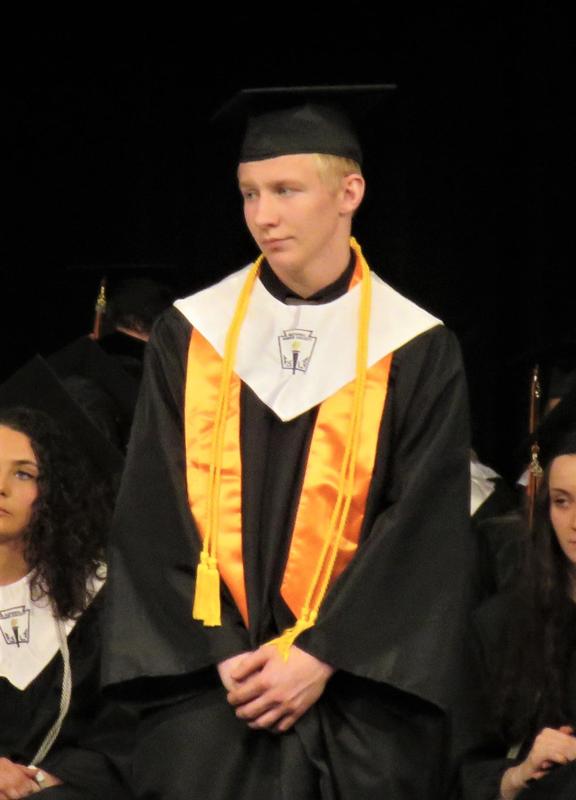 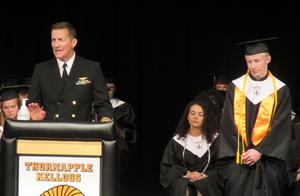 Honors, scholarships and recognitions of achievement in high school were bestowed upon Thornapple Kellogg High School Class of 2022 Tuesday night. One, very special honor, was officially awarded to Matthew Middleton.

“One of your classmates has reached that fork in the road and has chosen that lesser worn path,” said Strand after citing Robert Frost’s poems “The Road Not Taken.”

“The Naval Academy has been ranked the fourth hardest school in the country to get into. But the footprints that Matthew will follow on that lesser worn path have been made by some pretty impressive individuals,” said Strand.

Notable graduates of the Naval Academy include 54 NASA astronauts, more than any other school in the country and 73 Medal of Honor winners.

“Another reason it is little traveled is that young men like Matthew, and the young women, who attend the Naval Academy don't just go there to get a great education, they make a commitment to learn and practice the leadership skills necessary to make them effective naval and marine corps  officers. They spend four years learning values like honor, courage and commitment.  These are the core values of every member of the navy and marine corps team,” said Strand.

He continued by reminding everyone that for more than 200 years members of the Naval service have been ready to protect the country, deter conflicts around the globe and be victorious in battle if needed.

“We will be faithful to our core values of honor, courage and commitment as our abiding duty and privilege. These core values will be vital to Matthew. They will be the compass by which he navigates the course of his life as a Naval and Marine Corps officer.”

Middleton has said he would like to become a Navy SEAL.

“There will be a time in Matthew’s future where the lives of his sailors or marines will depend on his leadership and judgment. It is an enormous responsibility and one that is never taken lightly. This road before Matthew is not going to be an easy one. There will be challenges and there will be struggles,” said Strand.

“But I have no doubt he will be able to rely on that essential resource that helped lead him to this path of leadership integrity and service in the first place. He will rely upon you - his family, his friends, his teachers, his counselors and his coaches. You all in some way lived the example that he has followed. You have shown him what it means to be part of a community. You have shown him what citizenship requires of each of us.  You have shown him that teamwork and leadership requires putting others' needs before your own. After today Matthew will be representing you on a new team- a team of over 650,000 sailors, marines, and officers that make up the most powerful Navy in the world - your Navy. So now it is my honor to present Matthew with his official appointment to the United States Naval Academy.”

Middleton is the son of Luke and Jami Middleton and was nominated for the Naval Academy by U.S. Rep. Peter Meijer. He said he is excited about this opportunity and it is something he had set as a goal for himself.

Middleton also has graduated as among the top 10 students in his class academically, has been a member of the National Honor Society, and will give the opening remarks at Thursday’s graduation ceremony. During high school, Middleton has earned all-conference honors in wrestling and football and served as captain of both teams. He finished fifth this year at the state wrestling finals.

He will leave for the academy in Annapolis, Md. in late June to begin his seven weeks of basic training.