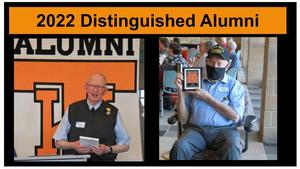 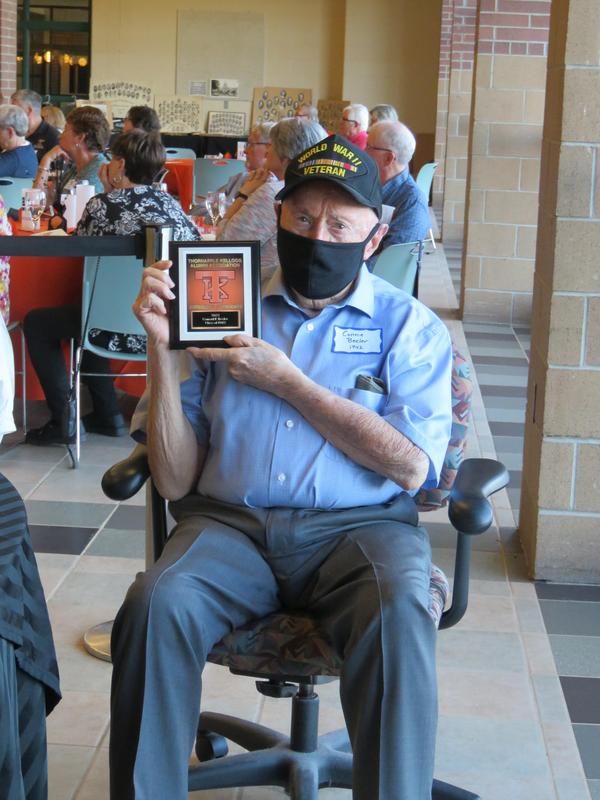 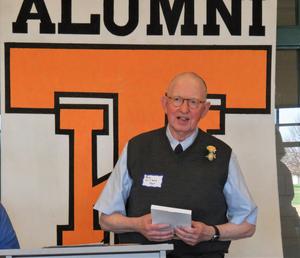 An important mission of the TK Alumni Association is to recognize and honor distinguished alumni. Two more alumni were honored at the 2022 spring alumni banquet. Conrad Beeler, Class of 1942, and Robert “Bob” Williams, Class of 1957, were both honored as this year’s distinguished alumni at the banquet. Each received a plaque, alumni t-shirt, and a congratulatory round of applause from everyone.

Conrad “Connie” Beeler sat in a roped off corner of the middle school cafeteria during the banquet. Wearing a face mask, he was socially distancing for his health. At 99 years old, Beeler was the oldest alumni at the banquet.


Alumni Association Historian Cindy Riva Middlebush presented the honors and introduced both alumni to the crowd. She said Beeler grew up in Middleville and attended TK schools from kindergarten through 12th grade. His parents founded the Beeler Funeral Home in 1926, originally located on Larkin Street. In 1955 the current Beeler Funeral Home was constructed on  West Main Street. Conrad and his wife, Henrietta, operated it for more than 60 years. He only recently retired in 2010 but continues to keep his mortician’s license current today.


He attended Wayne State to get his formal training in mortuary science and in 2018 received the 70-year licensee award.


In addition to working the funeral business, Beeler owned and operated an ambulance service, worked at White’s for $1 a day, drove a TK school bus, and has been involved in Rotary, Shriners, and Masons.


“Looking through the 1942 yearbook one can tell Connie was an active student,” said Middlebush. “He played sports and was the vice president of his class.”


Beeler joined the Navy after graduation and trained at the Great Lakes Naval Base in Chicago. He served in the Navy from 1943-1949 and has been awarded several medals and awards for his service. “He was awarded the Veteran of the Year for his leadership, devotion and patriotic service,” said Middlebush.

Middlebush said it was an honor to recognize Beeler. “Today, at 99 ½ years old, Connie is impressive. He continues to stay active both physically and mentally. He shares his accomplishments and gifts with humility, warmth and a keen sense of humor.”

As she presented the awards to Beeler, he waved and tipped his World War II Veteran hat to everyone who attended as they gave him a standing ovation.

The second alumni honored at the banquet was Robert “Bob” Williams, from the Class of 1957.

After graduating from TK, Williams enrolled at GRJC then graduated from George Williams College in Chicago and from Springfield College in Massachusetts. He became a YMCA director in Palo Alto, California, Schaumburg, Illinois, and Charleston, West Virginia.

“Finally, he became a YMCA campaign counsel and assisted YMCA’s around the U.S. with capital campaigns. He helped raise $80 million over his career,” said Middlebush.

Williams also did a six-month active duty tour in the U.S. Army and earned college money by working at Whites.

He spent his first 18 years in Middleville before exploring the world. He has since returned to Middleville and joined the Rotary Club where he has served as president for the past two years. He also served 12 years as a board member and fundraiser of the Thornapple Area Enrichment Foundation. During that time he established the Charles and Margery Youth Activity Fund and, along with his classmates, the TK Class of 1957 scholarship fund.

Williams, his four brothers and his mother, are all TK graduates.

“It’s a real honor to receive this award,” said Williams. “I’m awfully proud of our schools. I want to say thanks to the board and to the leaders of this organization -  what a great job they all did in putting his banquet together tonight.  It’s a phenomenal amount of work.”