TK District to be Included in State Videos 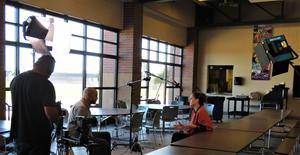 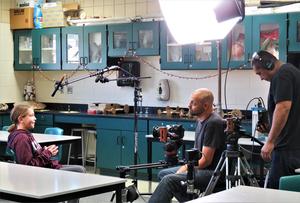 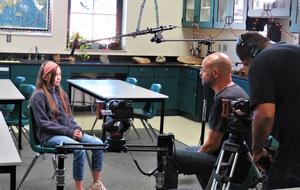 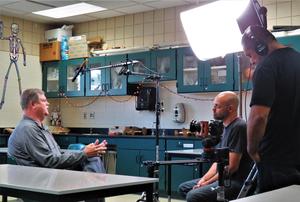 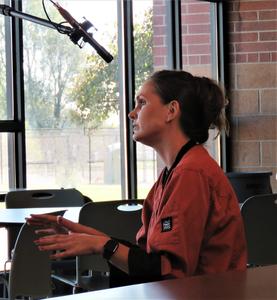 Thornapple Kellogg Schools is being included as part of a statewide series of videos produced for the Michigan Department of Education to promote the 10-cent Farm to School program, using locally grown produce including produce grown in school gardens, nutrition and food safety.

TK Food Service Director Jessica Endres, middle school science teacher Shaun Davis and two sixth-grade garden club students were each interviewed and filmed recently for the videos which may be completed by the end of the year.


In the last two months, videographers working for MDE, have traveled around the state to various schools to talk about the Farm to School initiative and ways schools are involved. TK was selected to be part of the video production since the district has participated in the program since it was a pilot program offered in 2016.


The goal of the videos is to help educate people about the 10-cent initiative program for Farm to School, make other districts aware of how the program works, and encourage other schools to participate. The program provides schools with matching incentive funding - up to 10 cents per meal - to purchase and serve Michigan-grown fruits, vegetables and legumes. This year 138 school districts are participating. The state has approved ramping up funding from $575,000 to $2 million and making the program available to all schools in the state.


Endres said participating in the program is not difficult at all. “We love it. It allows us to provide a variety of options for students.” She said the district uses Michigan fruits and vegetables as often as possible and tries to encourage students to try new foods.


She purchases the local foods through a variety of sources including local Farmers Markets, local groceries, Broadline suppliers, and Cherry Capital Foods, who sources Michigan-made products specifically. She also has used produce grown by the middle school garden club when it’s available


“When the kids are out there planting, growing and picking the items, they take ownership of it and are proud of it,” said Endres. “When we are serving something fresh, you can taste the difference. It’s a great way to introduce students to new foods and get them to at least try them.”


Shaun Davis is the middle school garden club advisor, taking it over just last year. He said the club participation varies throughout the year with a high of about 25 to 30 students. This summer the garden produced a variety of peppers, beans, zucchini, tomatoes, and watermelon.


“I want to get more kids involved and we want to start growing some vegetables indoors before the weather permits us to get outside in the garden,” he said. “Spring is the most exciting time when the kids get to decide what they want to plant and how much to plant.”


He teaches students about the soil and what different plants take out of the soil. He also talks to them about ways to keep the soil healthy for future crops. “I think it’s important for kids to learn where their food comes from and how it’s grown. It really gives the kids a sense of pride and ownership in the food we grow,” he said.


Lillian Starin and Kaiya Beck are both sixth-grade students involved in the garden club. Beck said  she wants to be a chef someday and growing her own food is a fun way to use fresh vegetables and herbs in experimenting with her own recipes.


“I’m especially looking forward to growing some herbs and spearmint,” said Beck. “I think the club is important because it helps our world and it’s a cheap way to provide your own food.”


Starin said she’s looking forward to planting strawberries. “I like picking the vegetables because I can eat them  right out of the garden,” she said.


In the 2018-19 year of the Farm to School program, participating schools purchased 93 different fruits, vegetables and beans grown by 143 farms in 38 Michigan counties.