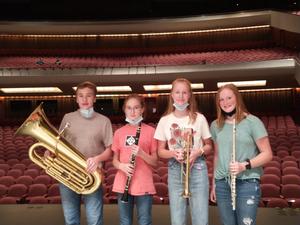 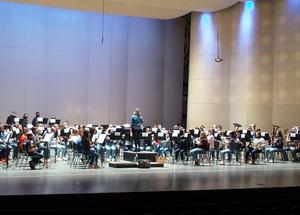 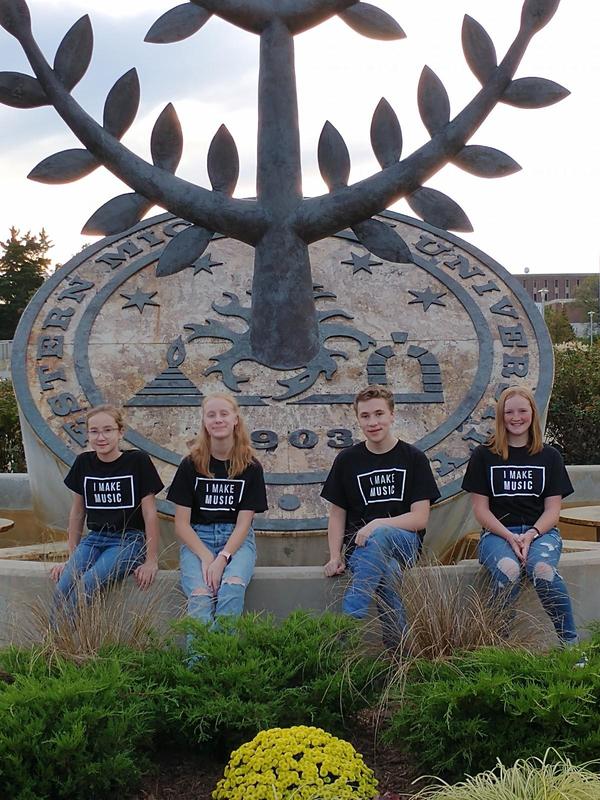 TK eighth-graders Avery Hagemann, Lucy Teunessen, Kenzee Knight and Myles Chambers were selected to be part of the Middle School Honor Band at Western Michigan University joining other middle school students from around the state.

“It was fun being on a college campus and seeing what it is like,” said Avery, who plays trumpet.

The four arrived at 8 a.m. to begin their special Honor Band day. They began to learn and rehearse music they had never seen before. After only one day of practice, the honor band performed an evening public concert at WMU Miller Auditorium. The group was conducted by Erin Cole-Steele, a nationally known conductor and music educator.

“It was scary in a way,” said tuba player Myles. “I think I woke up at about 5 o’clock. The anticipation was the worst part of everything. I was so excited and nervous.”

Lucy, who plays clarinet, said she was nervous at first, but by the end of the evening performance she felt very proud and good about her accomplishment.

Kenzee, playing the flute, said she was proud after the concert. “I learned that when something looks tough, if you spend time learning it, you will get it eventually.”

TKMS band director Mark Hagemann said the event challenged the band students who were surrounded by other middle school musicians of similar abilities. He said it was a unique and exciting experience for the students.

“It wasn't extremely hard to learn three pieces in one day, mainly because I knew there were others there who were doing the same thing. WMU students were also helping out. It made me feel kind of stressed, but for the most part it was pretty fun,” said Knight.

All of the students said despite the nerves, they were very proud of what they accomplished and glad they attended. “If a younger student asked me about this, I would tell them to work hard and pay attention. I would also tell them to work on the piece in their mind, because they can get complicated,” said Knight.

Lucy said she would also encourage others to be part of this if given the opportunity. “It was a good chance to expand my horizons and learn new skills in music.”

Avery agreed.  “It was a good experience and I learned a lot and I got to be on a college campus.”

“You just have to be part of the music - not just playing it,” said Myles. “It was definitely difficult, but it was also a lot of fun.”

All four students say they intend to continue band in high school and become members of the TK Trojan Marching Band.