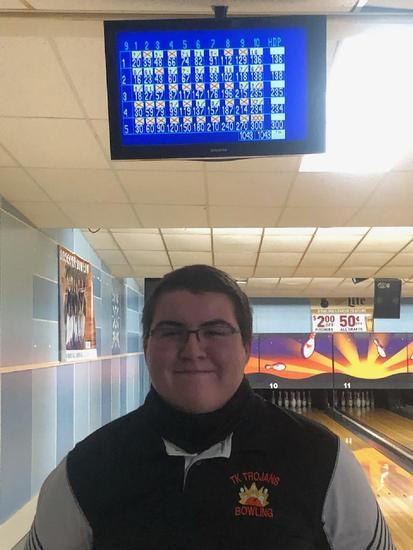 Michael Willshire thought he blew it. Shaking and trying to control his nerves, he knew immediately when he released his bowling ball in the 11th frame that it wasn’t good and he may have just blown his chance at a perfect game. But he was wrong. The ball hit just enough of the mark to topple all the pins for the 11th time in the game for the high school senior.

“I totally screwed up on the 11th. That one wasn’t good and I knew it.  I got lucky though and got the strike,” he said. “I admit it. I was shaking. It’s very nerve wracking.”

The feeling was totally different when it came to the last ball.  Michael said he felt very confident when the ball left his hand and curved perfectly down the alley. “I knew I had hit my mark.  I was really relieved that I had done it.”

He remembers his TKHS varsity bowling teammates shouting and cheering for him when the last pins went down. “I just remember feeling relieved that I had done it. I was so happy,” he said.

It turned out to be a really big something with a perfect game. It came in an  OK Gold Conference match against Cedar Springs.

Willshire said he got a strike with his first ball, but felt something wasn’t quite right. So he switched to a Phaze III bowling ball for the rest of the game. After that, Willshire said it was all about focus, concentration and hitting his marks.

“Bowling is a really mental game,” said Willshire. He considers the oil patterns on the floor, the different finishes on the bowling balls and even the different cores in the balls.

“There’s a lot more to it than just throwing the ball down the alley,” he said. “I’m learning to throw the same rotation every time, hitting my mark and knowing how to make adjustments when I have to,” he said.

It was the focus and concentration he needed last week to keep his nerves in check and complete the perfect game. “I just tried to quit thinking about it and just go through my procedures like I always do. I was shaking though. When I was waiting for my turn, I was looking over at all the buttons on the electronic scoring machine and thinking about what they all do -  just trying to focus on something else – anything to distract me from thinking about getting another strike.”

Not one to normally show a lot of emotion, Willshire said he remembers just having the biggest smile and the best feeling of relief. “I know my teammates were clapping and cheering,” he said. “We’re all pretty low key though.”

His teammates also had great nights of bowling at the same match.  Wyatt Jacobson bowled games of 243 and 234 and Ethan Kriekaard rolled a 235. Michael’s 300 game and the other three scores from his teammates were the four highest scores  by any guys in the OK Gold Conference during the first week of the 2020-2021 season.

Willshire credits his success to a lot of repetition and practice.  “You start to get into your routine and your rhythm. It’s just practice  - a lot of practice.”

Willshire started bowling at the Mid Villa in Middleville. When it closed, he moved to a bowling alley in Wyoming where he joined leagues, started taking lessons and bowling every day. “It took a long time and a lot of practice, but I just kept getting better,” said Willshire.

While he’s ecstatic about bowling a perfect game, he said his goal now is to become a more consistent bowler.  He said that will only come with more practice and more competition. He plans to continue bowling in college and has committed to Davenport University. He wants to study cyber defense and ultimately work in cyber security.