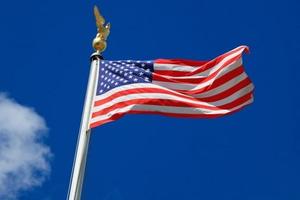 The 10th annual Thornapple Kellogg High School and community Veterans Day message had to be delivered in a different way this year, but the message was still the same – thank you to all veterans. Because of COVID-19, the gymnasium couldn’t be filled with students, community members and veterans Instead, the dedication and recognition had to be done via video production. Still, the heartfelt thanks and appreciation for those who served came through loud and clear as high school students all watched from their classrooms Wednesday morning.

This year’s program included special recognition of John Loftus who was instrumental in starting the combined school/community event. At the first Veterans Day program in 2011, John was front and center, proudly wearing his U.S. Army uniform.

In a 2011 Grand Rapids Press article about the event, John was quoted as saying, “This community has a spirit that’s unlike anything else and hard to capture anywhere else. This was a great day for all veterans. All these kids need to realize freedom is never free. I don’t want them to forget,” said Loftus.

Loftus died in 2013 at the age of 85. “John was an incredible advocate for our veterans and reached out to the school to find out if there was a way we could have a program that would honor and support our veterans,” said TK High School Principal Tony Petersen. “Although John is no longer with us, his legacy remains strong. His dedication and efforts to support our veterans, this community and TK Schools will live on for generations to come”

The high school partnered with the village of Middleville to purchase and install a permanent bench at the Veterans Memorial in downtown. “We hope that the bench will serve as a reminder of John’s legacy and inspire others to honor our veterans,” said Petersen.

TKHS students participated in the video Veterans Day event. The TKHS choir sang a moving piece called “Homeland” and the band struck up a lively version of “United Nations March.”

Ana Saba gave a speech about what Veterans Day means to her and remembered stories from her grandfather.  Zoey Ziny also spoke about her great-grandfather’s service and the purpose of Veterans Day. Thea Zellmer introduced the program by saying “I’m thankful to all the men and women who laid their lives down for our country.” Tessa Wenger read the story of the MIA/POW table with a plate set for a soldier who isn’t there.

Normally, the roll would have been called and the names of all attending veterans read to the packed gymnasium. This year, the tribute was put into pictures of men and women who are serving or have served.

Petersen said he hopes next year’s ceremony will be back in person with veterans attending and receiving the recognition they deserve. For this year, he said he hopes the video will remind students and the community to honor and remember veterans, not just on Veterans Day, but always.