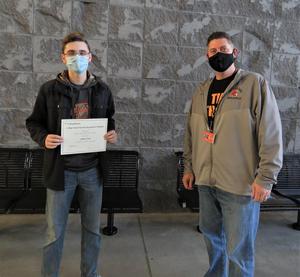 Thornapple Kellogg High School senior Caedon Zube was selected for the College Board National Rural and Small Town Recognition Program. He earned the honor because of his high academic achievements and his performance on the PSAT.

Caedon is the son of Brandy and Nate Zube. He currently serves as the TK National Honor Society president, is the grant committee chairperson for the Youth Advisory Council, and is a member of BPA. He participates in fencing and historical European martial arts.

After high school, Caedon wants to study pre-med and become a pediatric oncologist. Caedon said he’s already been applying to several colleges and universities and hasn’t determined yet where he will continue his education. He lists Harvard and the University of Chicago among his top choices.

With the national honor, the College Board will help make it easier for Caedon to connect directly with colleges and universities around the country and will help colleges see the range of his talents and interests by sharing some of his achievements.

“Colleges know that students who have earned this recognition are some of the most talented across the country,” the letter from the chief executive officer of the College Board read. “We are extremely proud of all you’ve accomplished and to honor you as part of the National Rural and Small Town Recognition Program.”

To be considered for the recognition, an invitation was sent to students who scored in the top 2.5 percent of the PSAT test takers who identified themselves as either belonging to minority ethnicity groups or attending a school in a rural area or are from a small town. Students then had to submit an application and were evaluated by the College Board.

Caedon said he learned of this recognition while he was at work one day at the Big O’ Smokehouse in Caledonia. “Honestly I was kind of blown away. This is a national program,” he said.

Caedon said he is enjoying his senior year at TK and was especially happy when students were allowed to return to the home football games.  He’s looking forward to a trip to England and France to learn more about World War II history. The trip was postponed from last summer due to the pandemic and has been tentatively rescheduled for this summer.