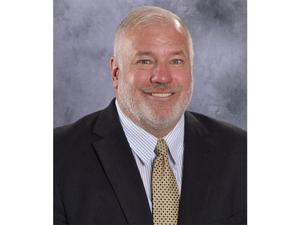 Dan Takens was ready for retirement after a 31-year education career. But when the call came in to help a neighboring school district, Takens said it was an easy decision to temporarily give up retirement and return to education.

“I’m a helper. When the district reached out and asked for help on an interim basis it was something I wanted to do. It’s TK.  I know the district well and I have friends who work in the district. I knew Tom (Enslen) and Rob (Blitchok both former TK superintendents) well and I know it’s a top-notch district,” said Takens.

Takens served as superintendent at Byron Center since 2008, retiring in December 2019. His career started in teaching at Kentwood Public Schools.  Then he moved to administration as an interim principal, then principal and then his move into the assistant superintendent and superintendent positions.

“I thoroughly enjoyed teaching and coaching and I had no aspiration to be in administration,” he said. “But at Kentwood, I had some administrators who encouraged me to take that step. I really enjoyed being a principal and having an influence over the entire building,” he said. From there it was a natural move into central office administrative positions.

Beyond his professional career, Takens said education has played an important role in his life. “I came from a dysfunctional family and that framework of teachers and coaches really supported me and helped me through challenging times,” he said.

Thornapple Kellogg Board of Education is in the process of conducting a superintendent search and a proposed timeline suggests a new administrator could be hired by the end of November and possibly ready to work in the district by January. Takens said he’s committed to staying as long as the district needs him.

Takens said he hopes he brings a steady hand and a calm approach to the district as TK not only deals with hiring a new superintendent but also the ongoing issues with COVID-19. The district is also just starting construction projects at three of the elementary buildings this fall.

“I want to tell everyone that we’ll get through this and be OK. My focus is on the positive and taking care of kids.  Things are going great here so let’s just keep it going,” he said.

There are undeniable similarities between TK and his former district in Byron Center. “Both have strong communities and support, good family values, and family-focused. I see families wanting to be involved,” he said. “And it’s exciting to see the growth in the district and construction starting. I’ve been through this before at Byron Center.”

Maintaining all the positives already in place within the TK district, continuing to be supportive of the teachers, families and students, and keeping the positive culture of the schools are all key goals for the interim leader.

When he’s not working and while he was just settling into a retirement routine, Takens said he has many hobbies. “I love to read. I’m an outdoorsman.  I love walking, biking, kayaking – anything outside. I love spending time with family and I want to do some traveling.”

Takens and his wife Kristi have four children; Hannah, Elizabeth, Kennedy and Mason. They also have one grandchild, Landon. His wife continues working as an elementary school counselor.

He said he also has plans to travel and explore more of his heritage. His father immigrated to the United States from the Netherlands at the age of 10. “I’m a first-generation American. I really want to get to the Netherlands and visit relatives there and learn more about our family.”

For now, he’s happy to be part of the TK family and looks forward to helping the district as long as needed. “TK is a real gem here – a sought out district.”