TK Classmates and Teachers Pay Honor with Donations of Hair 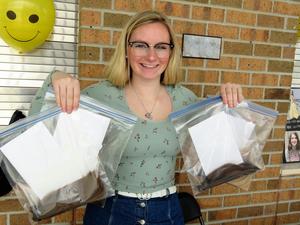 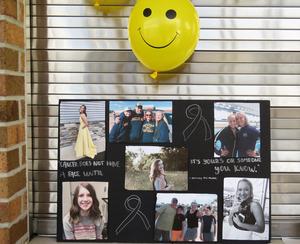 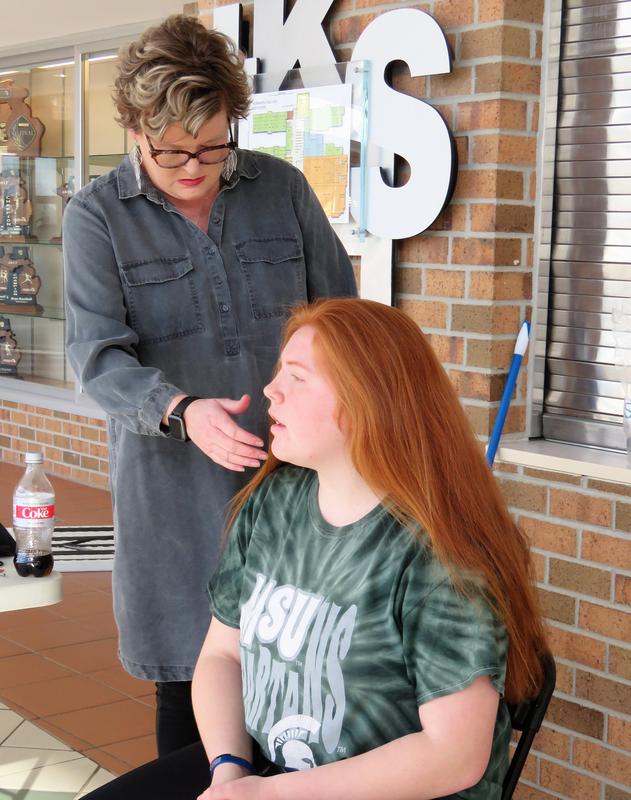 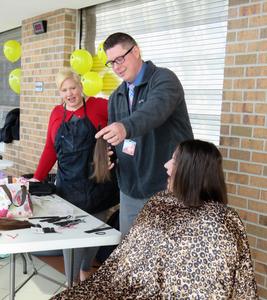 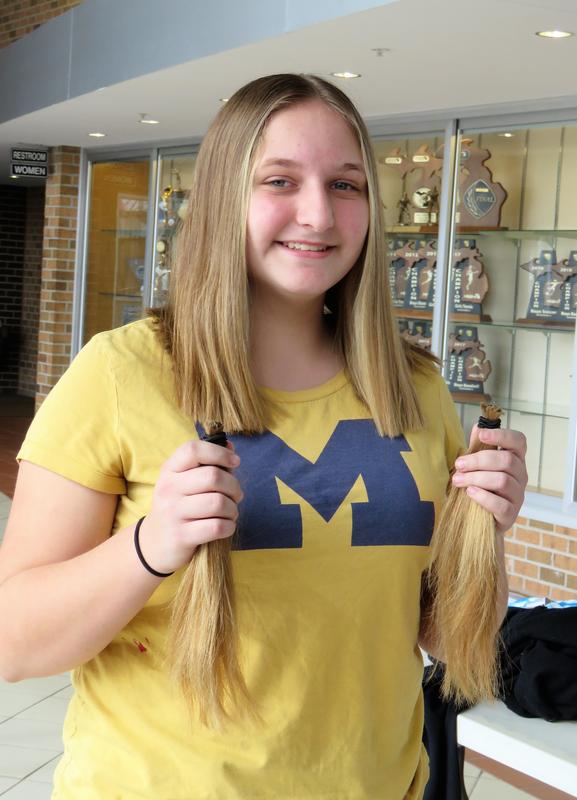 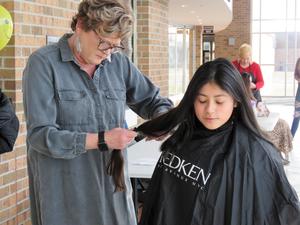 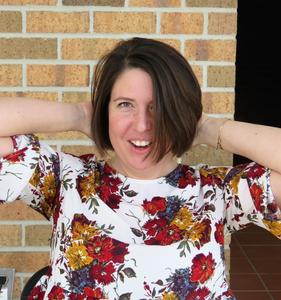 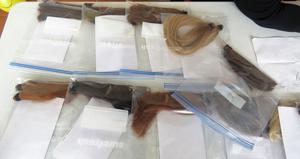 Britain Moore ran her fingers through her now much shorter hair and shook her head from side-to-side letting her new locks swing against her shoulders. The Thornapple Kellogg High School freshman was one of nine students who cut and donated at least eight inches of their hair to help make wigs for children without hair – all thanks to a classroom assignment and the efforts of TKHS junior Ebbie Appel.

“I love it,” Britain said of her hair – now 12 inches shorter. “I feel like for a lot of young girls their hair is their security blanket. I know for me it was. I wanted to be Rapunzel when I was little.  So if there is a little girl out there who wants hair why not be selfless and donate a little bit?”

The “Chops 4 Tots” campaign started out as a classroom assignment in Cary Saxton’s English class. Students were tasked with coming up with a project, writing about it and then advertising and selling the idea to classmates. Each class then voted on a favorite presentation and the winning project would be something the class could actually do together. Ebbie’s project of donating hair to Children With Hair Loss was selected.

It was something very personal for many of the high school students.  In January the junior class lost classmate Lydia Cole to cancer.  It seems everyone knows someone who has or had cancer.

“This organization (Children With Hair Loss) is where Lydia got her wig,” said Ebbie. “This – seeing all these people willing to get their hair cut - makes me feel really happy. I feel overjoyed right now.”

Not only did Ebbie lose a classmate to cancer, she also recently lost her father, Brian, to the same disease this year. “I just want to do all I can for everybody who has helped my family so much through all of this. I know how many friends and families and the community supported my family.”

The hair donations came from nine high school students, two high school teachers and one 4-year-old daughter of one of the teachers.  As each person came to their haircut in the athletic lobby, they were greeted with a poster of pictures of people with cancer – including their classmate Lydia and Ebbie’s father.

Saxton, Ebbie’s English teacher, was one of the teachers who donated.  Saxton admitted she wasn’t sure about having her hair cut so short, but ultimately decided to do it. “For Lydia. That’s why I did it.  I have the memory of her in my class. She was so incredible and I did it 100 percent because of her. If my hair donation can help make a wig for another girl like Lydia – then it’s worth it.”

Saxton said she is very proud of Ebbie and all the girls who donated hair.  “It’s like what Ebbie’s poster says - ‘Cancer doesn’t have a face until it’s yours or someone you know,’” said Saxton. “That poster Ebbie made shows the faces of cancer.”

High school teacher Amy Forman also donated her hair. “I’ve got lots of hair and this is for a very worthy cause. I’m glad to help other kids. It’s definitely an awesome feeling to be able to help others out and knowing this is the organization that helped Lydia meant a lot,” she said.

Amy’s 4-year-old daughter also decided to donate her hair. “I’m so proud of her. She really wanted to do it and what a great example Ebbie and these other girls have set for her,” said Forman.

Stylist Kelly Schondelmayer, of Lox Hair Salon in Middleville, donated her entire day to help and Kristi Palmbos, a former stylist, donated part of her morning. “I am close with Brian and his family and Ebbie is my babysitter. I wanted to help her in any way I could. She is just amazing,” said Schondelmayer.

For senior Isabelle Rakowski this isn’t the first time she’s donated her hair. In first grade she donated 16 inches of her hair and this time about eight inches. “It feels a little wired right now, but I like being able to help somebody else.”

Freshman Autumn Klinge knows what cancer is like. Three members of her family have had cancer. “I felt like I could help a little bit by doing this,” she said. She admits she was a little nervous at first and has never donated her hair before. But once it was over, she looked at her hair in the bags and felt good about her decision.

Kylee McDonald said she was excited about being able to donate. “I’ll do it again next year if my hair grows enough,” she said. “It feels wonderful!”

The support from classmates for the project overwhelmed Ebbie.  “I figured two or three people  – maybe,” she said. But by the end of the day, there were 12 bags of hair to donate.

Looking at the blonde, red and brunette colors, Ebbie said she was thrilled. “My dad always gave back to others and I’m just trying my best to follow in his footsteps and make him proud,” said Ebbie.