Half a T-Shirt Leads Texas Oil Worker to TK Kindness 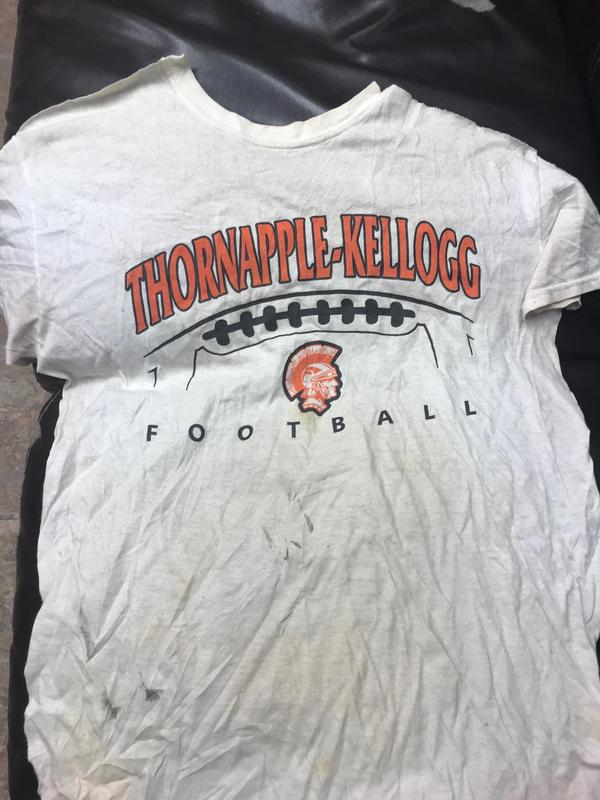 A simple email to Thornapple Kellogg High School from a man working on an oil rig in Texas reminds us all of how far kindness spreads even if we never know it.

Louisiana native Henry Bowman has worked on the oil rigs for years and was working in Texas when he reached into a box of what are usually scraps of fabric to use as rags. This time, when he reached in for a rag he found something a bit unusual.

“We have these big boxes of just old clothes and towels and stuff usually cut up into pieces. I just reached in and picked up a rag. I was surprised when I realized it was the complete front half of a T-shirt with a football on it.”

The orange and black letters spelled out “Thornapple-Kellogg football” with an orange and black Trojan head.  Bowman’s curiosity got the best of him. “I thought, ‘Man look at that. I wonder where it’s from?” he said in a phone interview.

Fortunately his curiosity was easily quenched with a quick Google search leading to Thornapple Kellogg’s website. As he was looking over the site he noticed an article about the high school’s recent Veterans Day program.

“I was going to send a picture of the t-shirt anyway, but then I got to reading that story and I just had to send an email to the principal,” he said. With Bowman’s permission to share, his email sent to TK High School Principal Tony Petersen reads:

I am a consultant on an oil drilling rig in Midland Texas, which is about 1,192 miles from your school. We buy boxes of rags to use on the rig that consists of old clothes, towels & just any scrap cloth materials. I reached in the box last night & pulled out a t-shirt front from your school. I’m attaching a picture of the shirt. I also pulled TK up on the internet & was very impressed with the article on your students paying their respects to the veterans. As a veteran myself, I was brought to tears to see young people honoring the veterans. I also appreciate you & your faculty for teaching your students about the sacrifices that was made by veterans. Tell your students & your faculty that an old veteran from Louisiana said “THANKS & GOD BLESS”!!!!!

Being a veteran himself - serving in the U.S. Army from April 1971 to April 1974 - he said the article was special. “That is the ultimate,” he said of the program. “It’s just cool that a school does that to recognize veterans. Few people even acknowledge veterans anymore.”

Instead of using the T-shirt as a rag on the oil rig, Bowman decided to keep the half a t-shirt and says he will put it on his charter fishing boat at his home in Louisiana.

“I think it will bring me good luck and it will remind me of your school and that veterans program,” he said. “To see that story about the veterans and see the pictures of the veterans - that just struck a nerve. Kudos to ya’ll.”