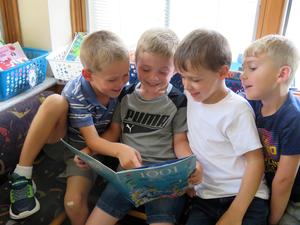 There was no surprise that Thornapple Kellogg Schools saw a student enrollment increase this year, but the growth is more than administrators expected.

According to student count numbers reported from Wednesday’s state count day, Thornapple Kellogg Schools increased enrollment by 71 students with more than half of the growth seen at McFall Elementary. McFall houses Young 5’s, kindergarten, and first grades. The district budgeted for an increase in enrollment, but only at a conservative growth of 16 students.

“I am not surprised at all that we saw growth,” said Superintendent Rob Blitchok. “It’s a significant number and definitely a positive for the district.”

The increased enrollment brings the district to 3,233 students total in Young 5’s through 12th grades.

A majority of the growth is coming at the elementary level. McFall Elementary saw the largest increase of all with 40 additional students this year.  That brings the total number of students at McFall to 555, up from 515 last year.

Lee Elementary, the middle school, and the high school are also up in enrollment. Behind McFall’s 40-student increase, the high school saw the second-largest growth for the district increasing by 23 students and bringing the total high school student body up to 987 students.

The middle school also saw an increase of 15 students putting the building at 730 students.

Lee Elementary remained steady with an increase of four students to 454 in the building. Page was the only school seeing a decline and now has 484 students - down slightly from a year ago. The district also counts 23 early childhood special education students included in the overall count numbers, but not assigned to a specific grade level or building.

Tuesday’s count numbers are still unofficial until a final audit by the state.

Superintendent Blitchok said the growth is coming largely from homes and families living within the district. He said this year's school of choice openings were reduced at McFall because of growing concern about lack of classroom space. He said he's happy to see the increasing numbers at TK during a time when many school districts are still facing declining enrollments.

“We have great schools and a great community. This is a place where people want to come and raise their families and attend school,” he said.