Read All About It - Lee Students Deliver Weekly News Broadcasts 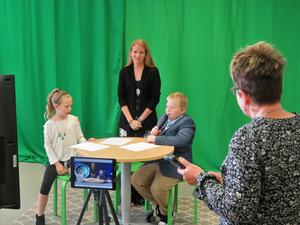 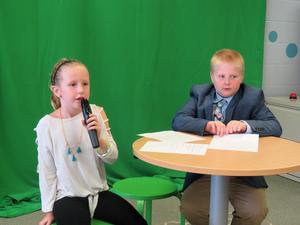 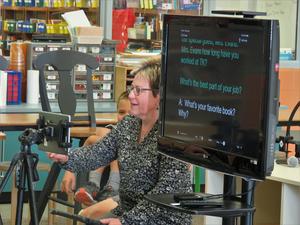 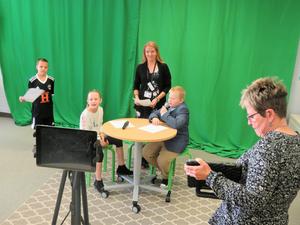 Ryker Stout arrived at Lee Elementary School Wednesday morning dressed for success - with a suit coat, dress pants and shirt and even a tie. He looked the part of a television journalist and hoped it would help him tackle his first assignment delivering the Lee Elementary news.

“I spent a couple of hours getting stuff ready and making sure I had everything. Then I went over my lines a bit so I knew what I was supposed to say. I liked doing it,” he said.

Ryker and other third graders will get a chance throughout the year to deliver the Lee Elementary morning announcements recorded in the Makerspace room using the green screen - much like real TV newsrooms use. Led by art teacher Kathy Bailey and librarian Dan Kenyon, the students will become more familiar with the technology and feel more comfortable speaking to others.

Chloe Canfield was the news co-host for the session. She admitted she was a little nervous about it at first.  “But I just took a deep breath and told myself I could do it,” she said.

Ryker said he too was a little nervous. He said he especially wanted to do a good job for his grandfather who recently passed away. “I knew he would be proud of me. I wanted to do it perfect for him.”

Lee Principal Dr. Angie Jefferson said the school plans to have third graders record announcements once per week then have teachers show it in their classrooms.

“This is possible this year because we have an art teacher here full time now,” she said. “She (Kathy Bailey) is the one who put this together and is working on it,” said Jefferson.

Jefferson said she thinks this project is an excellent use of the school’s Makerspace creative classroom center. “It gives our students confidence in speaking, they learn green screen technology, script writing, and it gives them a sense of community,” she said.

The young reporters will interview a special guest during each segment - some of the special guests will be people who work at Lee Elementary, but Jefferson said there will be may others as well. She’s hoping to have the superintendent as a guest, custodians, bus drivers, parapros and many more people who are part of the TK community. She even hopes to bring in some high school students to help promote plays, concerts and sporting events.

No newscast would be complete of course without the weather report and a sports update.

Sports reporter Andrew Larsen said it wasn’t that hard to do at all and would definitely encourage classmates to give it a try. “I would tell them it was awesome and to just step up to the plate and do it.”

Tripp Helzer had the toughest job using the green screen technology to deliver the weather report. “It’s kind of hard when you have to just look at the screen and point to something that’s not there,” he said.

Bailey said she loves this project. “I'm here in the Makerspace room and I just thought it would be a good way to put it to good use,” she said.

Librarian Dan Kenyon, who is new in his position at Lee this year, is also teaming up with Bailey to help work on the projects. “It’s exciting and there’s a lot the kids can do. They can be really creative,” he said.

Bailey promised some fun and creative newscasts in the future, but wouldn’t reveal any secrets just yet.

“You’ll just have to stay tuned,” she said.