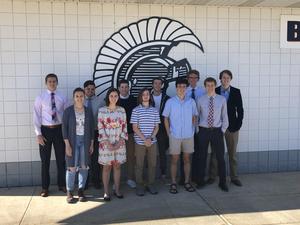 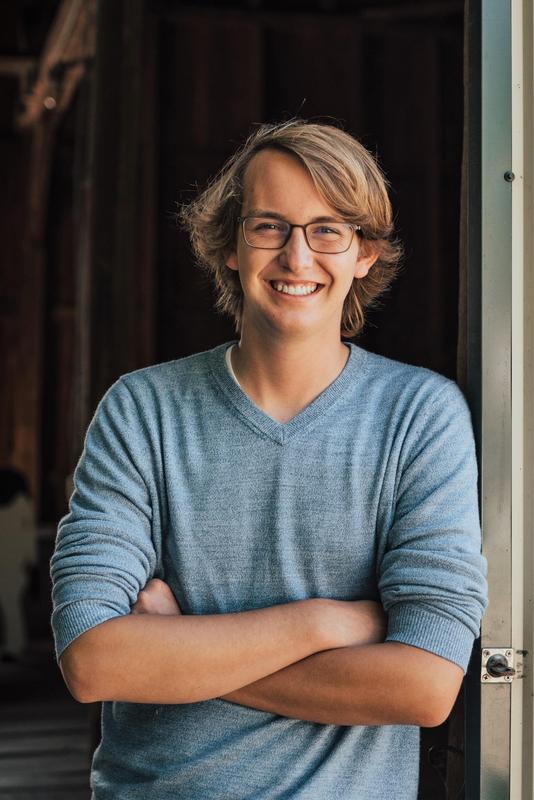 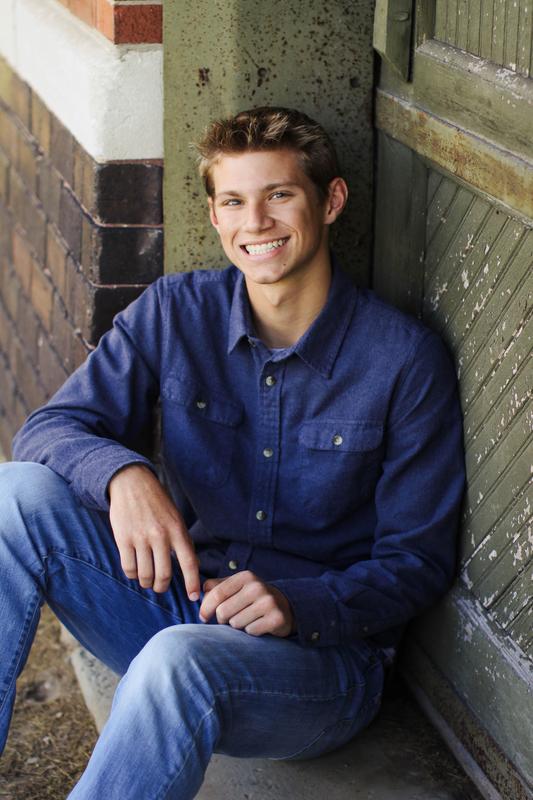 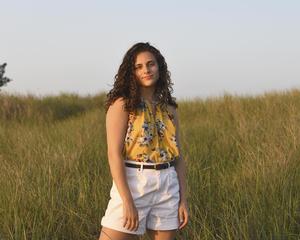 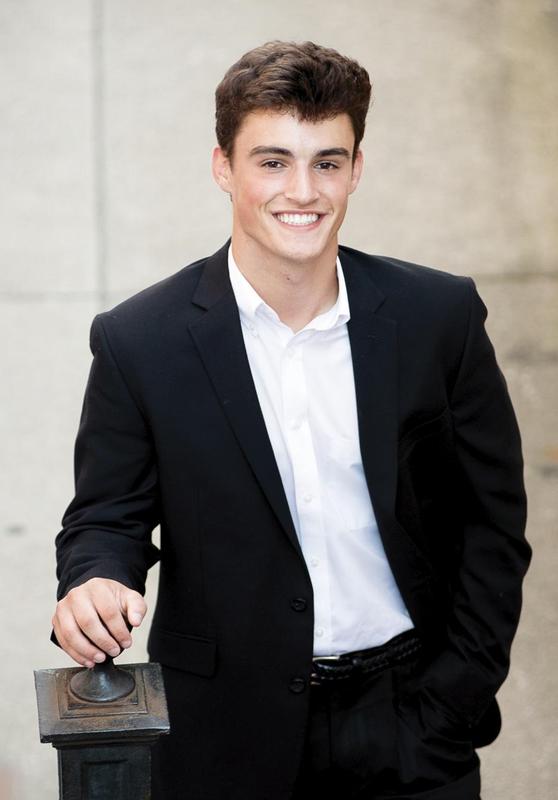 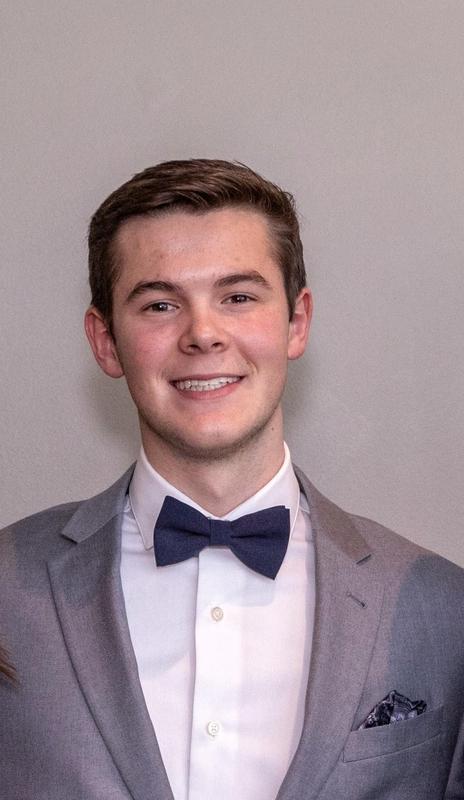 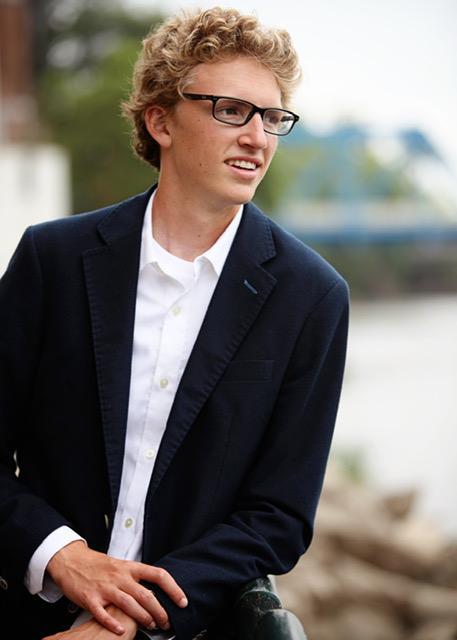 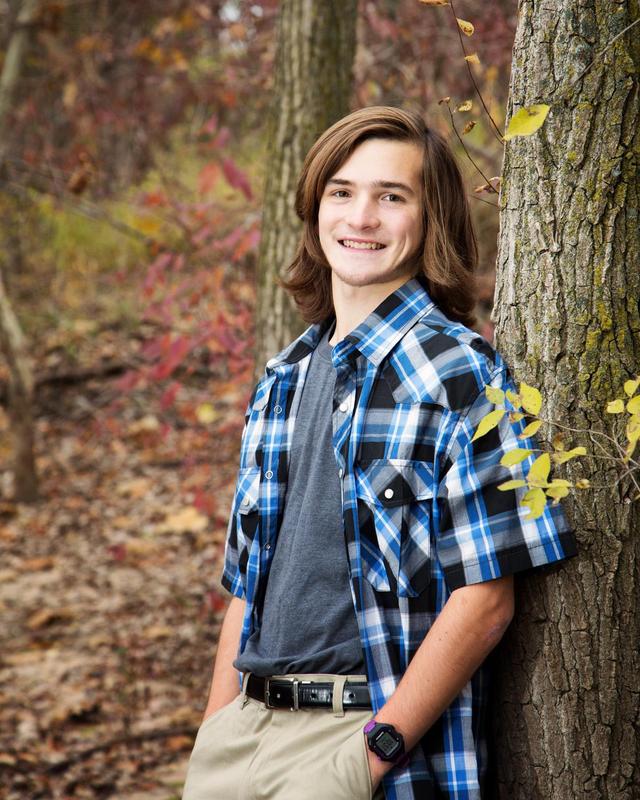 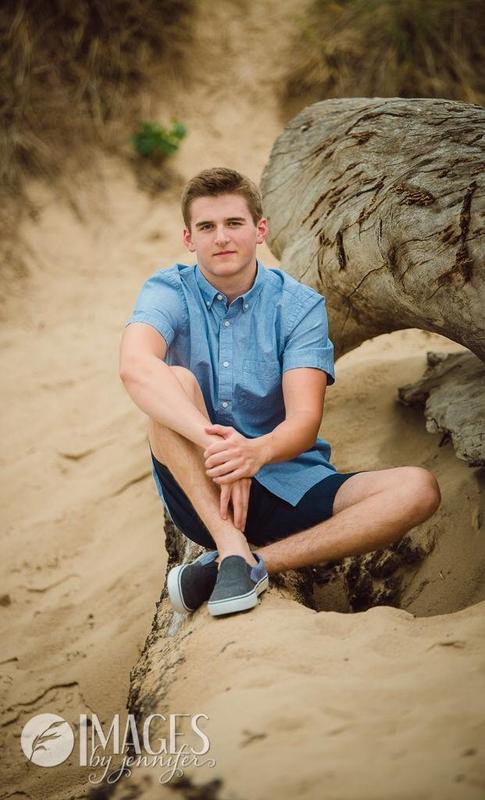 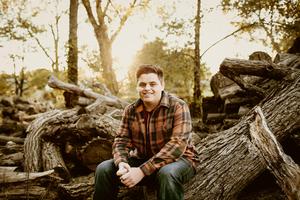 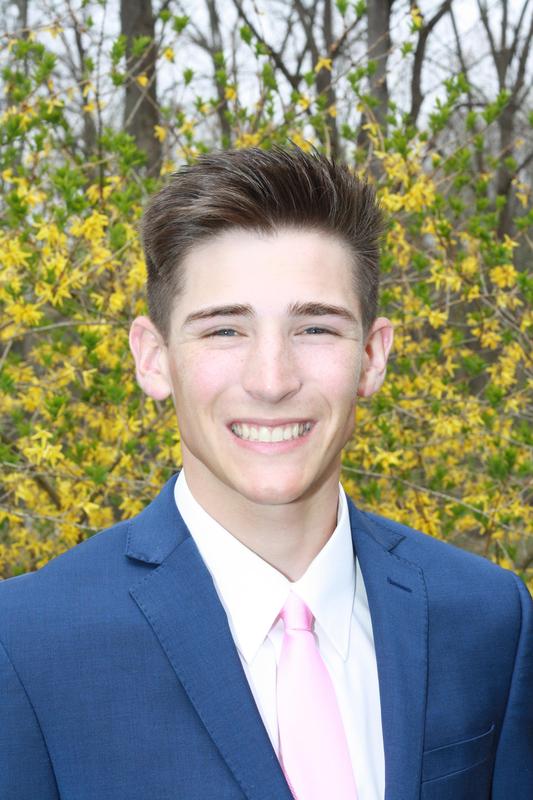 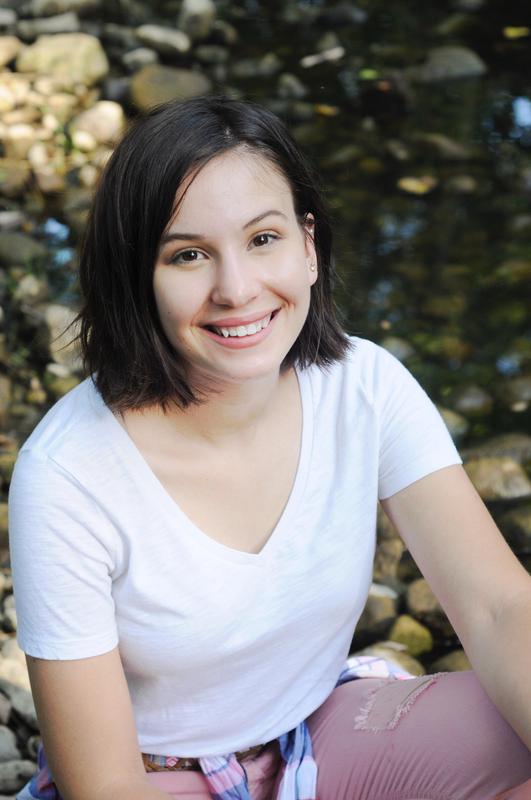 Carson Denman plans to attend the University of Michigan to study engineering, planning or majoring in naval architecture and marine engineering.

While in high school Carson was a member of the varsity soccer team, marching band and National Honor Society. He serves as class treasurer, is a member of Student Council and coordinated blood drives. He is also a member of the Academically Talented Youth Program.

He enjoys soccer, sailing, working on his jeep, hanging out with friends and watching movies.

He lists his greatest high school accomplishments as being named a top 11 student, being named an AP Scholar with Distinction and earning a first-place regional award at the 2019 Michigan Industrial Technology Education Society competition.

Samuel Dickman plans to attend the University of Michigan to pursue a career in either biology and earth science research or law and political science.

Sam lists numerous high school activities including being a member of the tennis team all four years where he served as co-captain his senior year, was named Academic  All-State and earned the coach's award. He played baseball for two years and was on the track team one year. He is also a member and co-founder of the Ping Pong club.

He served on Student Council for four years, is a member of the National Honor Society, and four-year member of the Business Professionals of America. He attended the Close-Up trip to Washington D.C., is a student section leader and helped run the annual Quidditch Tournament. He's been involved in several theater productions including "Oklahoma," "Cinderella," and "Joseph and the Amazing Technicolor Dreamcoat."

He's served on the Youth Advisory Council for six years and was chairman of granting. He has also been involved in the Circle of Giving and a member of a singing group of St. Cyril and Methodius.

He lists his hobbies as hiking, reading, traveling, music, adventuring/exploring nature, spending time with family and friends and listening to Podcasts.

He sees his greatest accomplishments in high school as co-founding the Ping Pong Club, beating the Calvin Christian tennis doubles team with his partner, and as a student council member helping the township renovate a house for people who have been displaced by a fire or other tragedy. He also recognizes accomplishments of joining National Honor Society, leading the student section and successfully planning and running the Quidditch 'Ville Cup. He says he hopes he has also led a positive and friendly life toward all his peers and is leaving a good legacy at TK.

Olivia Gaudreau plans to attend Grand Valley State Frederik Meijer Honors College this fall where she will major in political science, international relations and international business. She then plans to either attend law school or start her career on the international scene. She plans to be involved in clubs on campus, continue dancing and hopes to study abroad.

While in high school Olivia has been a member of the Business Professionals of America placing in the regional competition and qualifying for the state contest. She received the Society of Women Engineers' Certificate of Merit, is an AP Scholar with Honor, has been named student of the month three times during her high school career and was named a Rotary student of the month. She is a member of the National Honor Society and was on the homecoming float committee.

Outside of school she has been a company member at Caledonia Dance company for 14 years and was Class captain for the last five years. She competed and performed at numerous events including the "The Nutcracker" holiday performances, community performances, Grand Rapids Festival of Arts, Western Week in Caledonia and Christmas Tree Lighting ceremony in Caledonia.

Her hobbies include dancing, hiking, traveling, creating art, and politics.

She lists her greatest accomplishments in high school as being in the Top 11 in the class, earning Highest Honors, being a member of National Honor Society, placing first in legal office procedures in BPA at the regional competition, and creating numerous invaluable relationships with amazing teachers.

Isaiah Guenther plans to attend Cornell University to major in computer science and minor in business.

Outside of school he is a member of the Youth Advisory Council and works at Pizza Hut. He enjoys basketball, piano, reading, and playing ping pong and billiards.

He lists his greatest accomplishments in high school as defeating Wayland in basketball, helping start the Ping Pong Club, and performing a dance at the talent show.

Turner Halle plans to attend the Wharton School of  Business in Pennsylvania where he will concentrate in business economics, public policy and entrepreneurship and innovation. He also lists goals in his future as taking a summer road trip out west with friends to hike and camp, join the USA Olympic table tennis team and travel the world.

Outside of school he has been a member of the Youth Advisory Council for six years and serves as president.  He is a Y mentor, been involved with Circle of Giving for three years, Teens Against Tobacco Use and ESL for one year.

He enjoys playing tennis and ping pong, traveling and hiking, listening to music and playing guitar.

He lists his greatest accomplishments at TKHS as being named in the Top 11 of his class, helping the school raise 7,899 pounds of food in less than a week, and founding the Ping Pong Club.

Daniel Hannapel plans to attend the University of Michigan to study biology, pre-med or pre-dental.

Outside of high school, Daniel enjoys singing in church choir, being a Y mentor, being a member of the Youth Advisory Council for four years and being active with Circle of Giving for four years.

He enjoys spending time on the lake, surfing, being with friends and traveling.

He lists his greatest accomplishments in high school as being co-founder of the Ping Pong Club, being named as a Top 11 student, being vice president of the student council and the BPA.

Ashton is a member of the National Honor Society, marching band, track team and cross country team.  He enjoys running, being with friends and shooting hoops.

He lists his greatest accomplishment as graduating a year early and being able to start college earlier.

Brody Keiser plans to attend Ferris State University Honors College and will study sports communications. He would like to do internships with pro or semi-pro sports teams and have a career as a data analyst/sports journalist.

Outside of high school he serves on the Youth Advisory Council and as a youth basketball coach and referee.

His hobbies include playing sports including golf and basketball, going to the beach, spending time with family and friends, weightlifting, and playing video games.

He lists his greatest accomplishments in high school as being named to the Top 11 in the class, earning Highest Honors with a 4.3 grade point average, and being involved in clubs and services.

Lucas plans to attend Ferris State University where he will study pre-med.

In high school he has been a member of the tennis team, band, National Honor Society and ski club. Outside of high school he enjoys helping at sporting events, assisting the elderly, and working his part-time job.

His hobbies include playing tennis, snowboarding, traveling, playing video games, being with friends, and watching sports.

Evan plans to attend Grand Valley State University in the Frederik Meijer Honors College where he plans to pursue a degree in pre-med to become a pediatrician.

He has been active in high school in many sports. He played four years of baseball earning back-to-back district championships and an individual all-state academic award. He played four years of tennis and earned all-conference, individual all-state academic, most valuable player award, Iron Man award, first singles and tennis team captain. He is a four-year Student Council member, was named student of the month, is a member of the National Honor Society and participates in the TK ski club.

His activities outside of high school include being a member of the Barry County Youth Advisory Council where he has participated in roof sits and many volunteer projects. He has been a four-year leader of the Circle of Giving program where he teaches younger students about philanthropy and giving of their time and talents. He is also an active member of the Thornapple Valley Church.

Evan enjoys fishing with his family, snowboarding and spending time with family and friends.

He lists his greatest accomplishments in high school as being able to balance a hectic academic schedule including dual enrollment and many AP classes while being a two-sport athlete. He is most proud of being a Top 11 student.

Jenna Walters plans to attend Eastern Michigan University where she will major in biology and minor in Spanish. After college she plans to become a physician's assistant or a pediatrician and a Spanish interpreter.

Jenna has been very active in many high school events. She was a stage manager for three musical performances and also worked backstage for four other productions. She also had a part in one of the school plays. She serves as president of the Rise Against Discrimination at TKHS. She is active in National Honor Society and helped organize blood drives at school. She was a member of the girls JV golf team and a member of Spanish Club. She has been an Odyssey of the Mind team member, placing third in the state.

Outside of high school, Jenna has been attending GRCC and KCC. She has been an active member of the Youth Leadership Summit for two years and also participates in the Youth Advisory Council where she is a member of the grant committee. She has volunteered with Circle of Giving. For many years she has volunteered at her church's preschool room on Sundays and led different activities during Vacation Bible School in the summer. She also does face painting for multiple different church events. She volunteers through the Odyssey of the Mind program and has been an assistant coach for a Division I team. She has also been a judge and volunteer. Jenna has assisted in interviewing candidates for new teachers as a student representative and has helped with freshman orientation.

Her hobbies include gardening, cooking, playing with her dogs, studying Spanish, reading and playing videogames. She said she has a passion for working with children.

She lists her greatest accomplishments in high school as becoming a well-rounded and persistent learner. She also has maintained a high grade point average through high school and is proud to be in the top 11 of the class. She also lists being proud she realizes her goals and has developed good work habits.