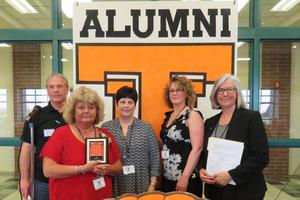 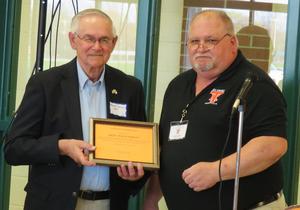 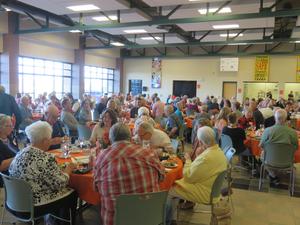 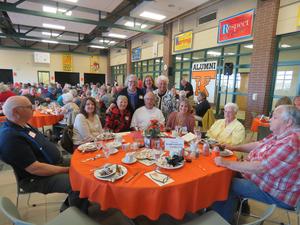 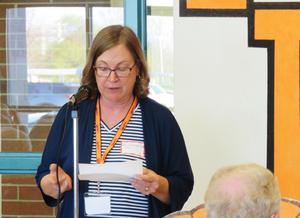 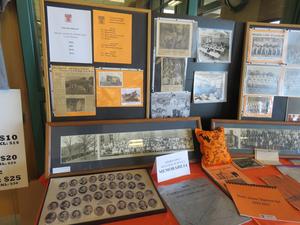 "Every Thornapple Kellogg graduate is unique. You are one of the 10,552 TK alumni to date," said Randy Eggers, President of the TK Alumni Association as he welcomed guests to the second annual all-class reunion dinner. Remembering the past and looking forward to the future of Thornapple Kellogg Schools, about 150 people gathered Saturday in the middle school to reminisce, meet old friends and support their alumni association and their alma mater.

Old friends and classmates got reacquainted before dinner. They shared stories about the past as the browsed through yearbooks and looked at the many memorabilia items displayed by the Alumni Association. There were letterman jackets, a signed football from a championship team, and even a piece of the original gymnasium floor. Tables were decorated with senior pictures from old yearbooks and orange roses courtesy of Thornapple Floral.

It was also a night to recognize and honor a distinguished alumnus. The association started the special recognition at homecoming 2017 and at last year's first reunion. Saturday's honoree, Jody Helrigel Pratt, is the 10th alumni to receive the award.

Pratt graduated in 1966 and was recognized for her leadership in the area of education and community service.

In 1990 she moved to Wayland Schools where she served as principal for both Moline and Steeby elementary schools and later to serve as the Director of Curriculum. Today, she continues her teaching career as an adjunct professor at Ferris State University, helping prepare the next generation of teachers.

In addition to her continuing work in education, she also volunteers with Junior Achievement of Grand Rapids, serves as a certified Lay Leader at Middleville United Methodist. She also continues doing mission work and was recently appointed as the state coordinator for Volunteers in Michigan for both domestic and international mission work. She has made five mission trips to Russia, 12 to Peru and continues to travel to Ecuador for women's projects.

"It is clear that Jody continues to use her gifts to educate, inspire and give back to this world," said TK Alumni Association Historian Cindy Middlebush in presenting the award.

Other recognitions were awarded by Eggers to Don Williamson who is a founding member and past president of the Alumni Association. His leadership and commitment helped form the association in the beginning and bring in new members to help continue the association work.

In just three short years, the association has grown its membership, started an active Facebook page, and established an Alumni Association web page. They were awarded the Community Partner Award by the Barry Community Foundation and this year will award their first TK Alumni Scholarship to a graduating senior. The scholarship has been a goal of the association since they started and serves as a way of giving back to the district and future generations of alumni. With the help of the Thornapple Area Enrichment Foundation, a fund has been established to ensure the continuation of the alumni scholarship.

Thornapple Kellogg Schools has a long history with the first graduating class from Thornapple Kellogg in 1931. Prior to that, Middleville had a small school with their first graduates in 1881. In the 1930's the Thornapple Township country schools with the help of the W.K. Kellogg Foundation consolidated into one school district.  With the gathering of the country schools into one large district, it became necessary to build more buildings.  In 1931 a building was built at 509 West Main and was called the Thornapple W.K. Kellogg Rural Agricultural School.

Jim and Joy Cline also said their family will mark five generations this year  - four from TK and his grandmother from Middleville before consolidation. Jim said his father graduated in 1937,  he in 1962, his son in 1987 and his grandson will graduate this year.

Before dinner was served by the TK Food Service Special Events, TK Alumni gathered in singing the TK Fight Song with the words coming easily to recall for many. Veterans were honored and the class roll was called as representatives from each graduating year were recognized. The oldest attending alumni, Richard Stager, graduated in 1948 and the youngest,  Emily Jenkins, in 2014. The oldest living TK alum is Maxine Robinson- graduate Class of 1937.

Mark your calendars now. Next year's annual alumni dinner will be May 2, 2020. All TK Alumni are welcome. Watch the alumni website at tkschools.org and Thornapple Kellogg Alumni  Facebook for more details about all alumni association events.