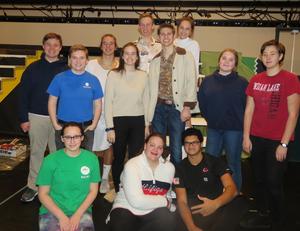 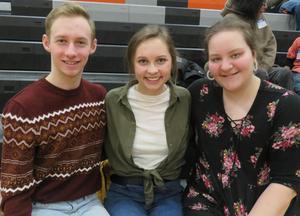 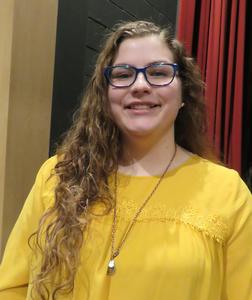 Thornapple Kellogg High School senior Jack Schneider played the role of "Charlie" in "Willie Wonka Jr. " when he was in fifth grade. In the same year, classmate Grace Hauschild played the role of "Violet" who blew up into the giant blueberry and another classmate, Katie Dinkel, was the "Candy Man."

Since then, all three have continued to be part of every musical and play in middle school and high school. It's led to lifelong friendships and a path to their potential futures.

The cast and crew have been hard at work preparing for the three evening shows of "Joseph and the Amazing Technicolor Dreamcoat" March 7, 8 and 9.  Shows start at 7 p.m. Tickets are $5 for students and $7 for adults. Many cast members say this may be their favorite shows of all.

When the curtain goes down at the end of the last show it will mark the end of performing for some students, but also a new beginning with many new opportunities.

"Doing all this has really helped me figure out what I want to do and what I want to study. I've found my passion," said Dinkel who in addition to being part of the high school performances has helped with middle school plays and this year is the assistant director for the Page Elementary play.

She plans to study at DePaul University in Chicago to earn a theater arts degree. She hopes to work in theater possibly running youth education productions and programs or community theater. She would also be interested in directing and writing.

Her classmate Grace Hauschild has been able to continue developing her love of music and singing and being on stage. Hauschild, who has been named to the All-State Choir three years during her high school career, plans a future in music education and hopes to become a high school choral director where she hopes she will be able to direct her own high school productions some day.

As for Schneider, he has his eyes set on the big city and bright lights in New York.  After high school, he is headed to the American Musical and Dramatic Academy in New York City where he hopes to prepare for a career in film and on stage. He hopes to land a spot in a Broadway show someday soon.

Schneider said he knew the first time he stepped on stage as "Charlie"  that something magical was happening and he liked it. "It just gives me a weird bubbly feeling when the audience is applauding and you know you've delivered a good performance," he said. " It's very rewarding for all the work you have to put in."

"I'm very thankful for the program here and all the friends I've made. It's been the best," Schneider said.

Several other seniors - Keauna Hayes, Chaz Knorr, Sam Dickman, Kameron McLaughlin, Olivia Branch, Connor Sleet, Sydney Chambers, Valerie McNamara, Frida Burchardt, Jenna Walters and Sam Craven -  are also making the final curtain call this year, some of them relatively new to the stage and others having been in nearly every production in high school and middle school.

Kameron McLaughlin has been working on stage sets all through high school while also being on stage for most the high school and middle school productions. His time working with theater sets has made him realize his love of building things leading to his decision to study architecture in college.

"I've found I don't like the singing and dancing as much, but I like the acting in the plays," he said. "And I like making the sets and helping backstage."

Keauna Hayes has performed in six out of the eight plays and musicals in high school. She looks forward to studying music performance in college with hopes of making music her profession. Her dream: "I want to have at least one song on the radio," she said.

Chaz Knorr was on the football team so he only participated in the spring musicals and not the fall plays. "It's a good mesh with everyone. We have a good school climate here. I've developed lifelong friendships from being in the musicals," said Knorr.

He admits he will likely feel a little emotional during his last high school performances.  "It's just a great group of people and it doesn't matter if you're a freshman or a senior, we just all work together."

Knorr plans to join the Marines once he graduates.

Sam Dickman has also found a way to mix sports and theater as he played tennis all four years of high school and participated in nearly all the plays and musicals.

"I just like the interaction with all the cast. The musical draws in groups from all over the school. Some are brand new. Some are athletes and some have been on stage a lot. It's just a different climate and is a great way to make connections with students I probably otherwise wouldn't have gotten to know."

He admits ending this part of his high school career is difficult. "But it's just the next step. It's been really fun while it lasted."

Dinkel said she'll probably have mixed feelings when the play comes to an end.

"I think more than anything I'm proud of all we've done here. We have put on some amazing musicals and yes I'll be sad to see it end, but I'm happy for all that we've done," said Dinkel.